Items related to On the Down Low: A Journey into the Lives of "Straight&#...

Home King, J. L.;Hunter, Karen On the Down Low: A Journey into the Lives of "Straight" Black ...
Stock Image 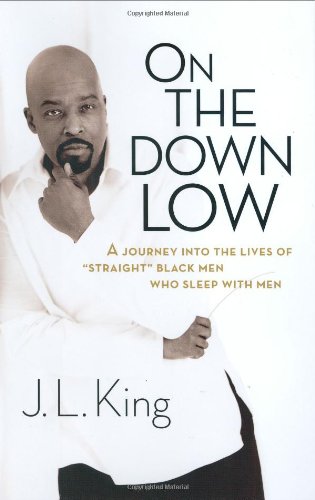 On the Down Low: A Journey into the Lives of "Straight" Black Men Who Sleep With Men

Quantity: 1
View all  copies of this book
Buy Used
Price: US$ 7.50 Convert Currency
Shipping: US$ 5.00 Within U.S.A. Destination, rates & speeds
Add to basket

Title: On the Down Low: A Journey into the Lives of...

Delivering the first frank and thorough investigation of life “on the down low” (the DL), J. L. King exposes a closeted culture of sex between black men who lead “straight” lives. King explores his own past as a DL man, and the path that led him to let go of the lies and bring forth a message that can promote emotional healing and open discussions about relationships, sex, sexuality, and health in the black community.

Providing a long-overdue wake-up call, J. L. King bravely puts the spotlight on a topic that has until now remained dangerously taboo. Drawn from hundreds of interviews, statistics, and the author’s firsthand knowledge of DL behavior, On the Down Low reveals the warning signs African American women need to know. King also discusses the potential health consequences of having unprotected sex, as African American women represent an alarming 64 percent of new HIV infections. Volatile yet vital, On the Down Low is sure to be one of the most talked-about books of the year.

The closer a secret is kept, the more powerful the impact once it is finally revealed. Such is the case with author and activist J.L. King's intriguing look at the lives and lifestyles of black men who sleep with other men but do not consider themselves to be gay. These men live "on the down low," the "DL" for short, and their sexual activities have gained significant notice as the rate of HIV/AIDS infection in black women has skyrocketed, with the vast majority of cases coming from heterosexual sex. King is a veteran of the DL himself and his book serves partly as a social and psychological survey of the other men he has surveyed and partly as highly candid memoir. King was well regarded in his community, popular at his church, successful in his career, and married to a woman who had no idea that his secret life existed. But when she caught him in a lie and with another man, the marriage collapsed and King's long and painful path to self-awareness began. King cites the negative image many socially conservative black men have of homosexuality as an obstacle to those men being honest with their partners and themselves about who they are. Among the more intriguing elements of On the Down Low are the peculiar approaches men on the DL have to the sexual act, seeking a strictly physical sexual relationship with their secret male partners while remaining in more traditional arrangements with women. Whether this discrepancy is a product of scrupulously guarded secrecy and shame or the natural preference of an understudied sexual identity is one of the numerous questions raised by this book. Though the infection statistics make the DL a huge public health issue, King is neither a sociologist nor a medical professional. And while a more clinical look at this issue would be welcome, King accomplished what he set out to do: provide light and insight into a world that so many have worked so hard to keep in the shadows. --John Moe