Items related to Jesuits : A Multibiography 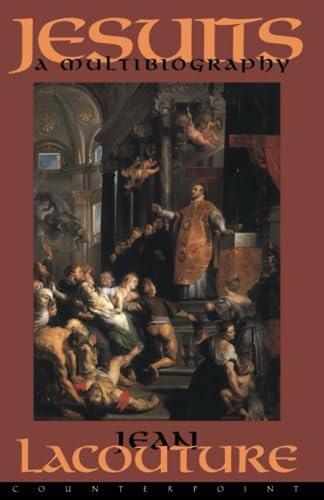 Quantity: 1
View all  copies of this book
Buy Used
Price: US$ 12.42 Convert Currency
Shipping: US$ 31.79 From France to U.S.A. Destination, rates & speeds
Add to basket

In this magisterial account, Jean Lacouture portrays the sweep of five hundred years of world history, from the dungeons of the Vatican to the jungles of South America to the royal courts of Europe and Asia. Jesuits: A Multibiography is history with a human face, the fascinating tales of men of the spirit who participated in the actions and passions of the modern world, a "world bursting its seams." "Be all things to all men," said the founder of the Jesuits, Ignatius of Loyola, to his followers. "Go and set the world ablaze!" The often picaresque story takes us to the Paris of Rabelais, where Ignatius, with a handful of his fellow students, formed what would become the Society of Jesus. We follow Francis Xavier to Japan and Matteo Ricci to China. We watch as the Society grows into Christendom's most powerful order, and as the "Black Legend" of a calculating, Machiavellian Jesuitry leads to its abolition in 1773 (it was restored forty years later). We see the great characters of history and culture-Pascal, Voltaire, Frederick the Great, Catherine the Great-play their parts. One of Jean Lacouture's most poignant portraits is of the twentieth century's most famous and beloved Jesuit, Pierre Teilhard de Chardin, a scientist-priest whose humanistic conclusions put him at odds with the Church. Lacouture's wide-ranging narrative illuminates Pope John XXIII's reforms and the Jesuit-inspired liberation theology movements in Central and South America. With the papacy of John Paul II, a riveting drama unfolds as the Jesuits are brought under new constraints.