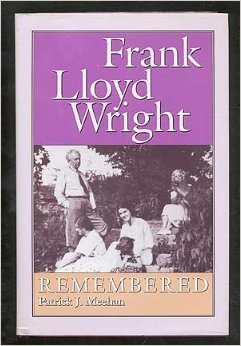 Excerpts from Frank Lloyd Wright Remembered "No one understands the third dimension as well as he, the capacity of architecture to be an experience in depth, rather than a mere facade." —Philip Johnson, FAIA "In public, he had a histrionic sense. When he got on the stage, he really enjoyed tremendously playing a part, and he enjoyed tremendously shocking people....But when you were alone with [him], in his own chambers, he became not only modest but really a very humble child. He was a very beautiful human being as I knew him." —R. Buckminster Fuller "...my friends [told me] I was a little giddy to think about approaching the great, expensive, and imperious Frank Lloyd Wright....I decided that no matter how busy or important, the master would listen to someone who wanted one of his works so much. In due time, a letter was dispatched telling him how important was a house by him, along with a map of the site, contours and trees — some of the specifics a client would give his architect, all of it making an excess-postage envelope. It is very likely that no normally sensitive ego would have been unmoved by such a panegyric." —Loren B. Pope "...deep down he was a modest man. Just look at his home at Taliesin. Instead of cutting down a tree, he built around it. He had a sensitive feeling to the creations of God. How could such a person be conceited?" —Egon Weiner "He was incredible. To describe him in any kind of conventional language seems an impossibility. Whatever he did, he did well—he was an avid reader, a wonderful speaker, a marvelous skater." —Olgivanna Lloyd Wright

Frank Lloyd Wright Remembered Patrick J. Meehan, AIA A sentimental and intriguing look at America’s most famous architect, Frank Lloyd Wright Remembered explores the wide range of relationships maintained by Frank Lloyd Wright—from architect to friend, from husband to father. The voices of many of those who knew Wright reveal here a multifaceted portrait. Organized around the recollections of those who knew the architect, worked with him, or had met or been inspired by his work, Frank Lloyd Wright Remembered offers a fascinating look at how Wright was perceived by those around him. Featured are reminiscences of architects such as Walter Gropius and Philip Johnson; of clients such as Loren B. Pope and Sarah Smith; of apprentices such as William Wesley Peters and Fay Jones; of friends such as sculptor Egon Weiner and publisher Ben Raeburn; of family members such as Olgivanna Lloyd Wright, Anne Baxter, and Catherine Dorothy Wright Baxter. These personal recollections—some discussing a relationship in depth, others punctuated by comic incidents that quickly capsulize a particular aspect of Wright’s personality—provide a better understanding of this great American architect.