Items related to McDonaldization: The Reader 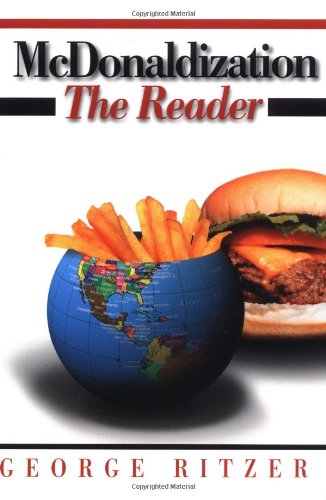 This companion to the bestselling The McDonaldization of Society includes a selection of articles and excerpts that focus on the application and extension of the idea of McDonaldization to a wide range of social phenomena, issues, and settings, including the church, state, theme parks, mountain climbing, the sex industry, the family, the police, higher education, the Internet, and more.

With an eye on the events of 9/11/01 and after, this accessible collection provides insights into the way McDonaldization is affecting cultures around the world, the ways in which it does or does not adapt to particular cultures, and various social movements from around the globe that have emerged in opposition to McDonaldization. The book is organized into the following three sections with a concluding essay that reflects on the future of McDonaldization:

George Ritzer is Distinguished University Professor at the University of Maryland, where he has also been a Distinguished Scholar-Teacher and won a Teaching Excellence Award. He was awarded the Distinguished Contributions to Teaching Award by the American Sociological Association, an honorary doctorate from LaTrobe University in Australia, and the Robin Williams Lectureship from the Eastern Sociological Society. His best-known work, The McDonaldization of Society (8th ed.), has been read by hundreds of thousands of students over two decades and translated into over a dozen languages. Ritzer is also the editor of McDonaldization: The Reader; and author of other works of critical sociology related to the McDonaldization thesis, including Enchanting a Disenchanted World, The Globalization of Nothing, Expressing America: A Critique of the Global Credit Card Society, as well as a series best-selling social theory textbooks and Globalization: A Basic Text. He is the Editor of the Encyclopedia of Social Theory (2 vols.), the Encyclopedia of Sociology (11 vols.; 2nd edition forthcoming), the Encyclopedia of Globalization (5 vols.), and is Founding Editor of the Journal of Consumer Culture. In 2016 he will publish the second edition of Essentials of Sociology with SAGE.