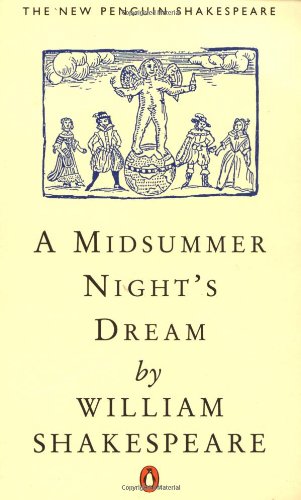 AbeBooks Seller Since May 10, 2010 Seller Rating

Quantity: 2
View all  copies of this book
Buy Used
Price: US$ 3.86 Convert Currency
Shipping: US$ 6.41 From Germany to U.S.A. Destination, rates & speeds
Add to basket

Comedy in five acts by William Shakespeare, produced in 1595-96 and published in 1600 in a quarto edition from the author's fair copy. It has long been the most popular of Shakespeare's comedies. Theseus, Duke of Athens, is about to wed Hippolyta, the Amazon queen. Meanwhile, two lovers, Hermia and Lysander, hide in the woods when Hermia's father demands that she marry Demetrius. Hoping to win his favor, Helena tells Demetrius of their whereabouts, and the two go to the woods in search of the fugitives. The forest is also full of fairies who have come for the Duke's wedding. After their king, Oberon, argues with his queen, Titania, he tells his mischievous servant Puck to drop magic juice into her eyes as she sleeps. The magic juice will make her love the first person she sees when she awakes. He also tells Puck to drop the juice into Demetrius' eyes, but Puck confuses Lysander with Demetrius and as a result Lysander falls in love with Helena. So does Demetrius, when Oberon tries to correct Puck's mistake. In the same woods a group of artisans are rehearsing a play for the Duke's wedding. Ever playful, Puck gives one of the "mechanicals," Bottom, an ass's head; when Titania awakens, she falls in love with Bottom. Oberon's magic then restores Titania and the four lovers to their original states. The Duke invites the two couples to join him and Hippolyta in a triple wedding. The wedding celebration features Bottom's troupe in a comically inept performance of their play, The Most Lamentable Comedy and Most Cruel Death of Pyramus and Thisbe. -- The Merriam-Webster Encyclopedia of Literature