Items related to The Closing of the American Border: Terrorism, Immigration... 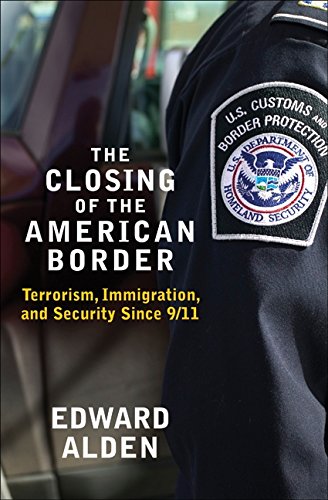 The Closing of the American Border: Terrorism, Immigration and Security Since 9/11

Title: The Closing of the American Border: ...

The Closing of the American Border is a provocative, behind-the-scenes investigation into the consequences of America’s efforts to secure its borders since 9/11. Basing his conclusions on extensive interviews with former secretary of homeland security Tom Ridge, former secretary of state Colin Powell, other Bush administration officials, and many of the innocent people whose lives have been upended by the new border security and visa rules, Edward Alden offers a striking and compelling assessment of the dangers faced by a nation that cuts itself off from the rest of the world.

"This is the book we've been waiting for--and which should be required reading at Homeland Security and in the Congress. `Seven years after 9/11,' Edward Alden writes, `it is much harder for a terrorist to enter the U.S. It is also much harder for everyone else.' America's greatness rests on the `tired and huddled masses,' which were among the world's most gifted and ambitious. Keep them out, and you'll keep out the country's most critical natural resource. Al-Qaida would like that, America should not."
-- Josef Joffe, author of Uberpower

"Edward Alden's fascinating book tells the story, for the first time, of how the most open nation in the world began to close itself off. Evenhanded, fast-paced, and powerfully written, Alden's book is based on a tremendous amount of original research and reporting that goes inside the corridors of power in Washington and far beyond. The picture that emerges is deeply disturbing: zeal-driven confusion and overreach, repeated disregard for the U.S. Constitution, and thousands of innocent people arbitrarily detained or jailed. This important book should be read by policymakers and ordinary Americans alike."
-- Amy Chua, Professor of Law at Yale Law School and author of World on Fire

"Opportunity for all, openness, freedom--for the past century, those three values have been America's gift to the world. In this penetrating, impeccably researched, and devastating book, Edward Alden shows how America sacrificed each one after 9/11, in a bid for security that has yielded far less than it has cost. This is a superb case study of how the conduct of policy can drift depressingly far from the worthy intentions that gave rise to it."
-- Edward Carr, The Economist

"Illuminating. . . . Sensible, carefully constructed roundup of recent border security measures by the U.S. government, analyzing their degrees of success and failure. Alden examines how America went from the most open country in the world to a nation hostile and unwelcoming to foreigners. . . . The author brings home the sobering consequences of closing America's borders. . . . Alden's cogent analysis forces a closer look at these developments. A useful study that informs without grinding an ax."
-- Kirkus Reviews

"This is an outstanding and important book--well written, vividly detailed, and completely convincing. I've been waiting for the writer who would put together the full picture of what America did to itself in the aftermath of the 9/11 attacks--how it changed from the country that attracted the world's talent to the country that detains, deports, and discourages talented foreigners who have no conceivable connection to any terrorist threat. Edward Alden now tells exactly that tale, and if enough people read it, it should change the way Americans talk and think about this issue."
-- James Fallows, author of Blind Into Baghdad