Items related to Between Memory and Desire: The Middle East in a Troubled... 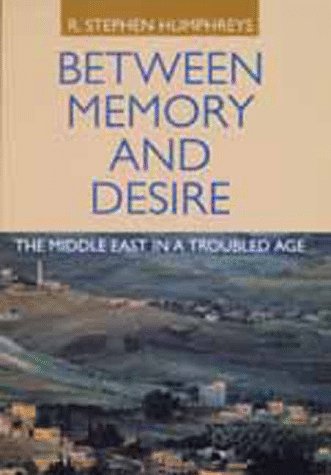 Between Memory and Desire: The Middle East in a Troubled Age

Title: Between Memory and Desire: The Middle East ...

Middle Easterners today are caught between memories of the past and frustrated hopes for the future. They struggle to find solutions to crises of economic stagnation, political gridlock, and cultural identity. In recent decades Islam has become central to this struggle, and almost every issue involves fierce, sometimes violent debates over the role of religion in public life. R. Stephen Humphreys's new book presents a much-needed and thoughtful analysis of Islam's place in today's Middle East. In clear, accessible language, he integrates the medieval and modern history of the region to show how the sacred and secular are tightly interwoven in its political and intellectual life.

Humphreys discusses the conflicts over power and resources that engage Middle Eastern politicians and looks at the major ideologies that have shaped these conflicts. He focuses on the impact of Islam on public life and examines Muslim ways of thinking about the "secular" versus the "religious." What values does Islam put into play? What challenges does it pose to "ordinary" politics? What resources does it bring to the struggle for social justice?

Humphreys recognizes the Western tendency to dismiss Middle Eastern politics as an incoherent tale of violence and fanaticism, and his book is especially valuable for its analysis of the deeper issues behind the headlines. These issues include the region's apparent inability to evolve democratic institutions, conflicts rooted in the peace settlements after World War I, and the unresolved debates over which cultural and moral values should drive Middle Eastern policy.

Between Memory and Desire reminds us that Middle Easterners remember the past in specific ways: the shame of the colonial era; the disappointments since independence; and the glory of the Middle Ages, when Muslim achievements were respected throughout the world. Even if these memories are only partially true, in defining the past, they also define what the future ought to be.

R. Steven Humphreys reveals the rich complexity of the Middle East--a region that stretches from Egypt to Afghanistan--in Between Memory and Desire, a set of ten "interlocking essays" that take on everything from economic growth and nationalist movements to Islamic human rights philosophy. Humphreys has a very clear and concise writing style that makes easily comprehensible an enormous amount of historical and cultural data with which most Western readers will be largely unfamiliar. He demolishes many of the mythic images that Americans have built up around the region and its people, like the "madman" dictator: "When we look beyond the façade of theater and posturing," Humphreys writes, "we will almost always discern a hard-headed politician who knows perfectly well how to set his goals and to craft strategies for achieving them.... The problem for us is not that the goals of Middle Eastern leaders are impenetrable; most of the time they are quite transparent. The problem is simply that these goals are not the ones that we want them to have."

The latter half of the book contains several excellent chapters on Islam--particularly on the concept of jihad and on the role of women in Islamic culture--that reveal the religion's diversity. It is a cliché, of course, to say that after reading a certain book you will never be able to think of its subject in quite the same way again, but it is also the truth concerning Between Memory and Desire and the Middle East. This book is strongly recommended to anybody who wants to know more about the region and its history than can be fit into a 30-second sound bite on the evening news.