Items related to Dewey: The Small-Town Library Cat Who Touched the World 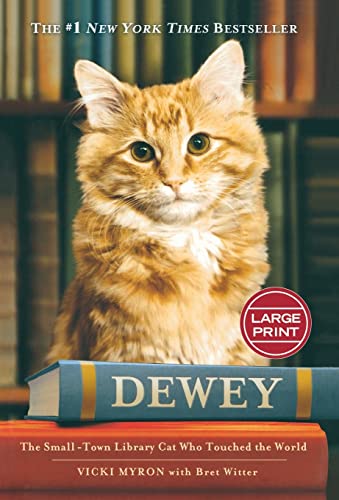 Dewey: The Small-Town Library Cat Who Touched the World

Experience the uplifting, "unforgettable" New York Times bestseller about an abandoned kitten named Dewey (Booklist), whose life in a library won over a farming town and the world -- over 2 million copies sold!

Dewey's story starts in the worst possible way. On the coldest night of the year in Spencer, Iowa, at only a few weeks old -- a critical age for kittens -- he was stuffed into the return book slot of the Spencer Public Library. He was found the next morning by library director Vicki Myron, a single mother who had survived the loss of her family farm, a breast cancer scare, and an alcoholic husband. Dewey won her heart, and the hearts of the staff, by pulling himself up and hobbling on frostbitten feet to nudge each of them in a gesture of thanks and love. For the next nineteen years, he never stopped charming the people of Spencer with his enthusiasm, warmth, humility (for a cat), and, above all, his sixth sense about who needed him most.

As his fame grew from town to town, then state to state and finally, amazingly, worldwide, Dewey became more than just a friend; he became a source of pride for an extraordinary Heartland farming community slowly working its way back from the greatest crisis in its long history.

Vicky Myron grew up on a family farm in northwest Iowa. She began as an assistant librarian at the Spencer library. Within a few years, she was promoted to director of the library. As a single mother, Vicky worked towards a masters degree for librarians during weekends and nights. It was then that she met Dewey, who made his home at the library and kept her company late nights while she studied. Vicky has served on the Executive Board of the Iowa Library Association, and on numerous statewide advisory panels. She is one of six library management instructors in the Iowa library system.

Bret Witter has ghostwritten nine books. Before becoming a professional writer, Bret spent three years as the Editorial Director of HCI, the publisher of the Chicken Soup for the Soul series. Bret lives in Louisville, Kentucky.