Items related to Lamia: A Witch 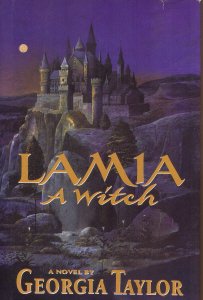 Witchcraft, adventure, and romance intertwine in a rich tapestry of 16th-century France, by the author of The Infidel (1979). The Inquisition finds necromancy in every town and village, and women by the thousands are tortured and burned as witches, a fate that has befallen the mother and grandmother of nine-year-old Lamia. Living alone in the forest after her mother's death, the child is feared as a witch for her parentage, her wild ways, and her flaming red hair. When she stands in danger of imminent capture by superstitious churchmen, Lamia is befriended by the wealthy and cultured Marco Cellini, who secretly practices an enlightened sorcery that edges toward true science. Under his protection, she meets the gentle Peronnette, whose solitary ways prompt accusations that she is a witch; Giles de Sade, a Florentine nobleman reluctantly expatriated to France to claim his paternal birthright as Count of Nevers; and the handsome, sensual Ghanim, a Moor who possesses skills of medicine and mind control unknown in Europe. As she grows into womanhood, Lamia abandons her secure existence and seeks to avenge her mother's death, which was carried out at the direction of Bishop Geoffroi. In her daring plan to set the Inquisition against the Inquisitor by having the bishop himself convicted of Satanism, Lamia makes herself vulnerable to the Church's paranoia. As she tightens her trap around the prelate, he strikes back, and she is captured and accused of being the notorious Red Witch of Nevers. Her cool courage and an ingenious rescue scheme devised and smoothly carried out by Marco, Giles, and Ghanim, combine to turn the tables once again. In a satisfying resolution, evil churchmen and vulgar nobles meet their downfall, while the oppressed triumph. Taylor brings to life the pretensions and persecutions of a bygone era, spiking them with modernist philosophy and morality. A fairy tale for adults, and delectably escapist entertainment. (Literary Guild selection) -- Copyright ©1994, Kirkus Associates, LP. All rights reserved.