Items related to Debunked!: ESP, Telekinesis, and Other Pseudoscience 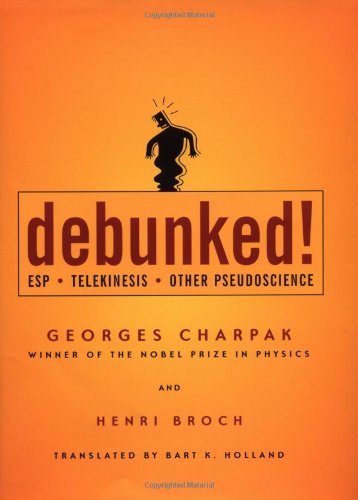 Debunked!: ESP, Telekinesis, and Other Pseudoscience

Title: Debunked!: ESP, Telekinesis, and Other ...

Can you walk over red-hot charcoal without burning your feet? Appear to stop the beating of your heart? Bend spoons using the power of your mind? In Debunked! Nobel Prize winner Georges Charpak and physics professor Henri Broch team up to show you the tricks of the trade and sleight of hand that keep astrologers, TV psychics, and spoon benders in business.

Using only the simplest of science, the authors explore the effectiveness of horoscopes―the blander the better―and why, with a television audience in the millions, any strange, unlikely prediction is almost certain to come true. If such insider information does not impress your colleagues, why not pierce your tongue with a skewer or demonstrate your eerie powers by using telepathy and the telephone to get a distant friend to intuit the number and suit of a card picked at random. Charpak and Broch show you how.

Not merely an expose of magic tricks, this book demonstrates how pseudoscientists use science, statistics, and psychology to bamboozle an audience―sometimes for fun, sometimes for profit. During the most scientifically advanced period in human history, belief in the paranormal and the supernatural is alarmingly common. Entertaining and enlightening, Debunked! is the antidote, vigorously asserting the virtues of doubt, skepticism, curiosity, and scientific knowledge. This lucid translation makes the arguments clear, understandable, and a pleasure to read.

Georges Charpak is a physicist at the European Center for Particle Physics (CERN) in Geneva and winner of the 1992 Nobel Prize in physics. Henri Broch teaches physics and zetetics, the scientific investigation of paranormal phenomena, at the University of Nice–Sophia Antipolis.