Items related to The Island of Dr. Moreau 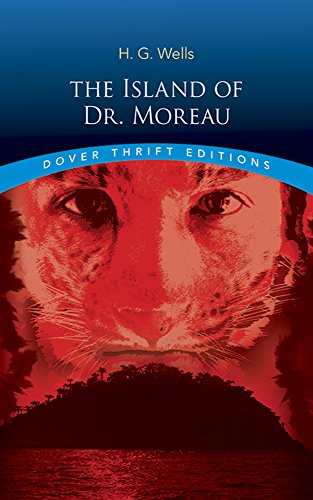 The Island of Dr. Moreau

Title: The Island of Dr. Moreau

Considered one of the fathers of science fiction, H. G. Wells (1866–1946) brought enormous inventiveness and an underlying social vision and moral concern to his strange tales and bizarre imaginings. A student of Darwinian biology, he formed his romantic conceptions of the scientific world at an early age.
This novel, one of his first forays into the science fiction genre, concerns a mad surgeon-turned-vivisectionist who, in his laboratory on a remote island, performs ghoulish experiments in an attempt to transform animals into men, with monstrous results. It is one of Wells' earliest and most sinister personifications of the scientific quest to control and manipulate the natural world, and, ultimately, human nature itself.
First published in 1896, The Island of Dr. Moreau has intrigued and horrified readers for generations. It will gain legions of new fans in this inexpensive Dover edition.

A shipwreck in the South Seas, a palm-tree paradise where a mad doctor conducts vile experiments, animals that become human and then "beastly" in ways they never were before--it's the stuff of high adventure. It's also a parable about Darwinian theory, a social satire in the vein of Jonathan Swift (Gulliver's Travels), and a bloody tale of horror. Or, as H. G. Wells himself wrote about this story, "The Island of Dr. Moreau is an exercise in youthful blasphemy. Now and then, though I rarely admit it, the universe projects itself towards me in a hideous grimace. It grimaced that time, and I did my best to express my vision of the aimless torture in creation." This colorful tale by the author of The Time Machine, The Invisible Man, and The War of the Worlds lit a firestorm of controversy at the time of its publication in 1896.