Items related to The Newtonian Moment: Isaac Newton and the Making of... 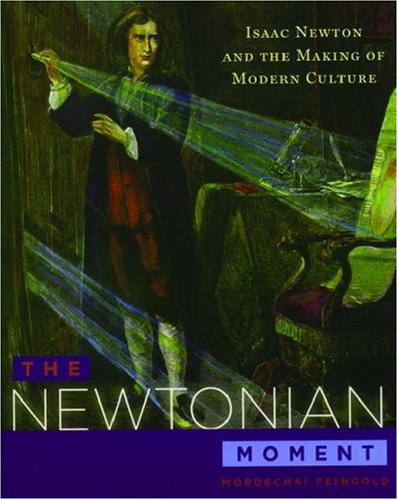 The Newtonian Moment: Isaac Newton and the Making of Modern Culture

Quantity: 1
View all  copies of this book
Buy New
Price: US$ 23.00 Convert Currency
Shipping: US$ 4.00 Within U.S.A. Destination, rates & speeds
Add to basket

Title: The Newtonian Moment: Isaac Newton and the ...

Isaac Newton is a legendary figure whose mythical dimension threatens to overshadow the actual man. The story of the apple falling from the tree may or may not be true, but Isaac Newton's revolutionary discoveries and their importance to the Enlightenment era and beyond are undeniable. The Newtonian Moment, a companion volume to a forthcoming exhibition by the New York Public Library, investigates the effect that Newton's theories and discoveries had, not only on the growth of science, but also on the very shape of modern culture and thought.
Newton's scientific work at Cambridge was groundbreaking. From his optical experiments with prisms during the 1660s to the publication of both Principia (1687) and Opticks (1704), Newton's achievements were widely disseminated, inciting tremendous interest and excitement. Newtonianism developed into a worldview marked by many tensions: between modernity and the old guard, between the humanities and science, and the public battles between great minds. The Newtonian Moment illuminates the many facets of his colossal accomplishments, as well as the debates over the kind of knowledge that his accomplishments engendered. The book contributes to a greater understanding of the world today by offering a panoramic view of the profound impact of Newtonianism on the science, literature, art, and religion of the Enlightenment.
Copiously illustrated with items drawn from the collections of the New York Public Library as well as numerous other libraries and museums, The Newtonian Moment enlightens its audience with a guided and in-depth look at the man, his world, and his enduring legacy.

Mordechai Feingold is Professor of History at the California Institute of Technology.