Items related to Nobody Knows the Truffles I've Seen 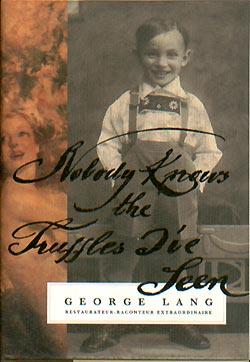 Nobody Knows the Truffles I've Seen

Quantity: 1
View all  copies of this book
Buy Used
Price: US$ 14.50 Convert Currency
Shipping: US$ 4.00 Within U.S.A. Destination, rates & speeds
Add to basket

In this immensely moving and entertaining memoir, George Lang tells the story--as only he can tell it--of his extraordinary life. Seasoning his account with splashes of comédie noire, as he relives the horrors of the Nazi takeover and of his harrowing escape to freedom, he details with generous measures of joie de vivre his metamorphosis from budding violinist to top strategist in the palate revolution that swept across America during the postwar years.

Born in Székesfehérvár, Hungary, only child of a Jewish tailor, Lang was destined for the concert stage. But his world suddenly collapsed: at nineteen he was incarcerated in a forced-labor camp, never to see his parents again. Miraculously (with the help of his rudimentary tailoring skills) he survived, only to find himself, after the liberation, undergoing torture and a trumped-up trial. Even his planned escape from Hungary in a hired hearse backfired, and he was forced to walk through minefields to reach the Austrian border.

After he landed in New York in 1946, his hard-won survival techniques served him well: a stint on the Arthur Godfrey show, an idyll at Tanglewood, a fill-in at Billy Rose's Diamond Horseshoe, before the momentous decision to switch from the fiddle to the kitchen, where a whole new world opened up. Soon Lang was managing a "wedding factory" on the Bowery, and then orchestrating banquets at the Waldorf for Khrushchev, Queen Elizabeth, Princess Grace, and the like.

The time was right. America was ready to be converted to the idea of food as entertainment, and George Lang was the man to spread the gospel. He took on The Four Seasons, he explored Indonesia and the Philippines to bring back exotic tastes for the 1964 World's Fair, he pioneered upscale restaurant complexes within shopping malls that were sprouting up all over. It was almost inevitable that he would invent a new profession, and as the first restaurant consultant he managed to create several hundred pleasure domes in more than two dozen countries. Finally he resurrected two great landmarks: the Café des Artistes in New York and Gundel in his native Hungary.

Lang's book also brings back the world of the Budapest coffeehouses, where life was one long string of paprika-flavored punch lines. His lively cast of characters ranges from Pavarotti and James Beard to President Clinton and Pope John Paul II. Nobody Knows the Truffles I've Seen is a quintessential Horatio Alger story told by a born raconteur.

"I had a ball," the author asserts in an autobiography that includes an account of his stint in a forced labor camp and his parents' deaths in Auschwitz. George Lang's unquenchable zest for life enabled him to overcome those ghastly ordeals and make the most of opportunities in America, where a Hungarian Jew could rise to the top of the restaurant business as a consultant responsible for such legendary establishments as the Four Seasons and the Cafe des Artistes. High spirits and punchy humor distinguish these engaging reminiscences.