Items related to The Greatest Story Ever Sold 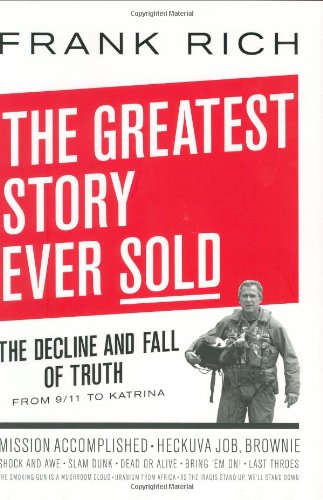 The Greatest Story Ever Sold

Title: The Greatest Story Ever Sold

When America was attacked on 9/11, its citizens almost unanimously rallied behind its new, untested president as he went to war. What they didn't know at the time was that the Bush administration's highest priority was not to vanquish Al Qaeda but to consolidate its own power at any cost. It was a mission that could be accomplished only by a propaganda presidency in which reality was steadily replaced by a scenario of the White House's own invention—and such was that scenario's devious brilliance that it fashioned a second war against an enemy that did not attack America on 9/11, intimidated the Democrats into incoherence and impotence, and turned a presidential election into an irrelevant referendum on macho imagery and same-sex marriage.

As only he can, acclaimed New York Times columnist Frank Rich delivers a step-by-step chronicle of how skillfully the White House built its house of cards and how the institutions that should have exposed these fictions, the mainstream news media, were too often left powerless by the administration's relentless attack machine, their own post-9/11 timidity, and an unending parade of self-inflicted scandals (typified by those at The New York Times). Demonstrating the candor and conviction that have made him one of our most trusted and incisive public voices, Rich brilliantly and meticulously illuminates the White House's disturbing love affair with "truthiness," and the ways in which a bungled war, a seemingly obscure Washington leak, and a devastating hurricane at long last revealed the man-behind-the-curtain and the story that had so effectively been sold to the nation, as god-given patriotic fact.

Frank Rich joined The New York Times in 1980 as the chief drama critic. He has been an Op-Ed columnist there since 1994. From 2003 to 2005, he was the front-page columnist for the Sunday Arts & Leisure section. He has worked as a film and television critic for Time, film critic for the New York Post, and was founding editor of the Richmond Mercury, a weekly newspaper, in the early 1970s. He is the author of Ghost Light, a childhood memoir; Hot Seat: Theater Criticism for The New York Times, 1980-1993; and The Theatre Art of Boris Aronson, coauthored with Lisa Aronson. He lives with his wife, the author and novelist Alex Witchel, who is a reporter for The New York Times.