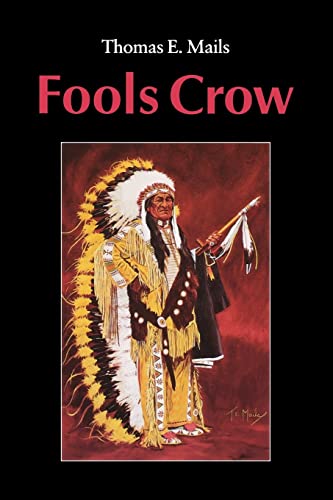 Quantity: 1
View all  copies of this book
Buy Used
Price: US$ 12.00 Convert Currency
Shipping: US$ 12.00 Within U.S.A. Destination, rates & speeds
Add to basket

Frank Fools Crow, a spiritual and civic leader of the Teton Sioux, spent nearly a century helping those of every race. A disciplined, gentle man who upheld the old ways, he was aggrieved by the social ills he saw besetting his own people and forthright in denouncing them. When he died in 1989 at the Pine Ridge Reservation in South Dakota, he was widely loved and respected.

Fools Crow is based on interviews conducted in the 1970s. The holy man tells Thomas E. Mails about his eventful life, from early reservation days when the Sioux were learning to farm, to later times when alcoholism, the cash economy, and World War II were fast eroding the old customs. He describes his vision quests and his becoming a medicine man. His spiritual life—the Yuwipi and sweatlodge ceremonies, the Sun Dance, and instances of physical healing—is related in memorable detail. And because Fools Crow lived joyfully in this world, he also recounts his travels abroad and with Buffalo Bill's Wild West show, his happy marriages, his movie work, and his tribal leadership. He lived long enough to mediate between the U.S. government and Indian activists at Wounded Knee in 1973 and to plead before a congressional subcommittee for the return of the Black Hills to his people.

An expanded edition of the classic book on the spiritual teachings of Frank Fools Crow. Advertising in Native American and New Age Publications. Excerpts of new material in New Age health magazines.