Items related to The Heart of the Antarctic: Being the Story of the...

Home Shackleton, Ernest The Heart of the Antarctic: Being the Story of the British ...
Stock Image 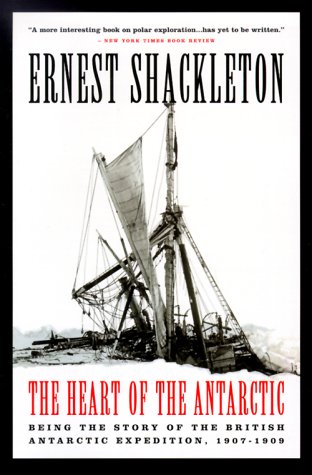 The Heart of the Antarctic: Being the Story of the British Antarctic Expedition, 1907-1909

Title: The Heart of the Antarctic: Being the Story ...

Shackleton's own thrilling account of his first Antarctic expedition and astonishing march to reach the South Pole.
With the same drama and adventure of Shackleton's later memoir, South, Heart of the Antarctic chronicles the first polar expedition he led himself, which lasted over a year and included triumph, defeat, and harrowing experiences. In 1906, Lieutenant Ernest Shackleton decided that he would make his own attempt to reach the South Pole, having been frustrated by his experiences on Captain Robert Scott's recent effort. His own expedition underwent such ordeals as the hazardous maneuvers to land on the icy Antarctic coast, the scaling of the 13,000-foot volcanic Mount Erebus, and wintering the polar blizzards before setting off for the South Pole. Shackleton's tension-filled account of his "Farthest South," reaching within 97 miles of his goal, is matched only by the return journey's race against time, an exhausted forced march back to camp before their ship sailed without them.
"A more interesting book of polar exploration . . . has yet to be written." - New York Times Book Review
"The book will takes its place among the great records of adventure . . . Shackleton has just the right combination of scientific interests and love of reckless adventure . . ." - Spectator

Shackleton here tells the quite remarkable story of the British Antarctic expedition of 1907 to 1909. Shackleton and his men made it to within 97 miles of the South Pole, experiencing along the way every hardship possible, then returning to their wooden ship before the ice crushed it. The text is buttressed with many original monochrome photos. Just reading this will make your toes fall off.
Copyright 1999 Reed Business Information, Inc.