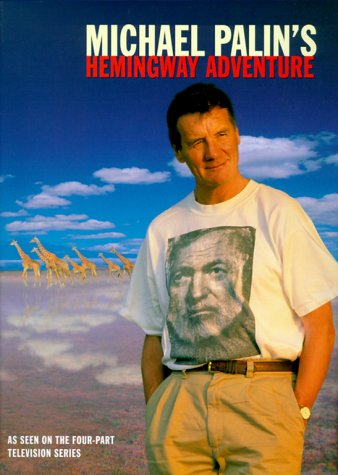 Retraces Hemingway's life, from fly fishing in Northern Michigan all the way to Cuba

Written while filming his TV series retracing the travels of America's literary titan, Michael Palin's Hemingway Adventure is a masterpiece in its own right. And it's just as eye-delighting in book form, thanks to Basil Pao's wanderlust-arousing photography and vibrant design. The witty, literary Palin, a Monty Python alumnus-turned-professional adventurer, takes us on the journey of a lifetime--Papa's and his own. "Hemingway's world was close and uncomfortable and itchy and sweaty and frequently exhausting," writes Palin. "It was, I felt, the real thing. To experience it would require the ability to absorb a little punishment, it would demand an open mind and a degree of recklessness. But it could and should be done."

Palin visits the restless Hemingway's many residencies, drinks (less excessively) in the same charming Parisian bars, tries boxing and Cuban marlin fishing, but he's really trying to discover what made Hemingway tick--what inspired him to write. In Spain, Palin examines Hemingway's passion for the country and the character of the matador in Hemingway's work while studying with young matador apprentices in a dusty Madrid bullfighting school. In Africa, which inspired and almost killed Hemingway, Palin learns spear throwing from Masai warriors, flies in a small plane around Mount Kilimanjaro, and searches for the site where Hemingway's own plane crash-landed. At the end of the day, drinking Hemingway's preferred beer, brewed still in Nairobi, Palin muses, "Mortality, of one kind or another, always feels close at hand in Africa. Maybe that's why Hemingway liked it, student of death that he was."

Palin begins in Hemingway's Illinois birthplace and ends his journey standing on the spot in Papa's Idaho kitchen where he shot himself, having recently broken down in tears, unable to complete JFK's request for a few simple words commemorating his inauguration. This isn't just a lively travel or TV tie-in book; it's a thoughtful, emotional biography. --Michele Norton