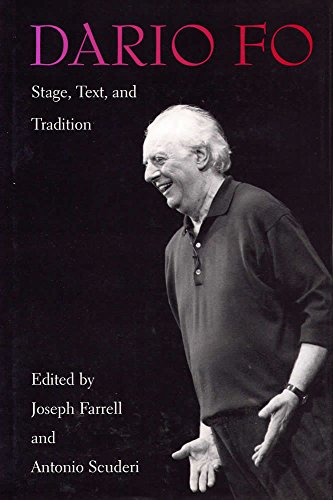 Quantity: 1
View all  copies of this book
Buy New
Price: US$ 42.00 Convert Currency
Shipping: US$ 4.00 Within U.S.A. Destination, rates & speeds
Add to basket

The contributors, all of whom either have previously published on Fo or have worked with him, are the major Dario Fo scholars of three continents. Going beyond the Marxist criticism of the 1970s and 1980s, the editors and contributors try to establish an appropriate language in which to debate Fo’ s theater. They seek to identify the core of Fo’ s work, the material that will be of lasting value. This involves locating Fo in history, examining the nature of his development through successive phases, incorporating his politics into a wider framework of radical dissent, and setting his theatrical achievements in a context and a tradition.

The essays cover every aspect of Dario Fo: as actor, playwright, performer, and songwriter. They also provide the historical background of Fo’ s theater, as well as an in-depth analyses of specific works and the contribution of Franca Rame.

Joseph Farrell is a senior lecturer in the Department of Modern Languages at the University of Strathclyde, Glasgow, Scotland. He is the winner of the John Florio Prize for his translation from Italian of Take-off by Daniele del Guidice.

Antonio Scuderi is an assistant professor in the Division of Language and Literature at Truman State University, Kirksville, Missouri. He is the author of Dario Fo and Popular Performance and The Dialect Poetry of Nino Martoglio: Sociolinguistic Issues in a Literary Context.