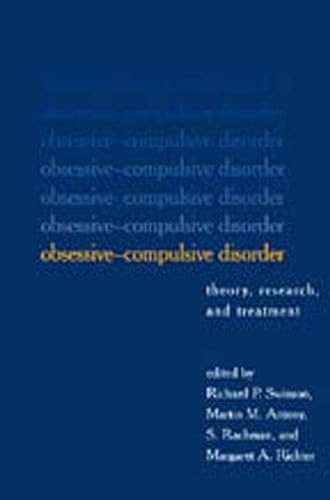 Quantity: 1
View all  copies of this book
Buy Used
Price: US$ 4.29 Convert Currency
Shipping: US$ 5.00 Within U.S.A. Destination, rates & speeds
Add to basket

Providing a comprehensive overview of obsessive-compulsive disorder (OCD), this book brings together timely contributions from leading researchers and practitioners in the field. In sections covering psychopathology, assessment and treatment, and obsessive-compulsive spectrum disorders, chapters contain a wealth of new and recent data, numerous case examples, and helpful conceptual and clinical pointers. An appendix features extensive resource listings for both clinicians and patients

Richard P. Swinson, MD, is Professor and Chair of the Department of Psychiatry, Faculty of Health Sciences, McMaster University. He is also Professor in the Department of Psychiatry at the University of Toronto, and Psychiatrist in Chief at St. Joseph's Hospital and Hamilton Psychiatric Hospital in Hamilton, Ontario. Previously, he held several appointments at the Clarke Institute of Psychiatry, including Vice President Medical Affairs, Chief of Medical Staff, and Head of the Anxiety Disorders Clinic. Dr. Swinson is currently chair of the Examination Board in Psychiatry for the Royal College of Physicians and Surgeons in Canada. He has published approximately 200 scientific papers, book chapters, and reports, mostly on anxiety disorders and related conditions. In addition, he was a member of the DSM-IV subcommittees for obsessive-compulsive disorder and for panic disorder and agoraphobia.

Martin M. Antony, PhD, ABPP, is Professor in the Department of Psychology at Ryerson University in Toronto, Ontario, Canada, where he was founding Graduate Program Director for the MA and PhD programs in psychology. He is also Director of Research at the Anxiety Treatment and Research Centre at St. Joseph’s Healthcare Hamilton. Dr. Antony has received career awards from the Society of Clinical Psychology (Division 12 of the American Psychological Association), the Canadian Psychological Association (CPA), and the Anxiety and Depression Association of America. He is a Fellow of the Royal Society of Canada and the American and Canadian Psychological Associations, and a past president of the CPA. He has published 200 scientific articles and book chapters and numerous books, including Handbook of Assessment and Treatment Planning for Psychological Disorders, Second Edition, and The Anti-Anxiety Workbook.

S. Rachman, PhD, is currently Professor of Psychology at the University of British Columbia in Vancouver, British Columbia, and was formerly Professor of Abnormal Psychology at the Institute of Psychiatry, University of London. He is an active clinician and researcher and has published extensively on the subjects of fear, anxiety, anxiety disorders, and obsessive-compulsive disorder. He has written or edited more than 15 books and monographs and many additional journal articles and book chapters. In 1980, along with R. Hodgson, Dr. Rachman published Obsessions and Compulsions. In 1992, he published a guide for patients and their families called Obsessive Compulsive Disorders with P. de Silva. His book, Fear and Courage, was published in a second edition in 1990. Dr. Rachman received a Distinguished Scientist Award from the American Psychological Association (Division 12) in 1984 and was made a fellow of the Royal Society of Canada in 1989.

Margaret A. Richter, MD, received her M.D. from the University of Ottawa and completed her psychiatric training at the University of Toronto. She was named the Mary Early Fellow by the Canadian Psychiatric Research Foundation from 1990-1992 for her work on the familial nature of OCD. Currently, she is Assistant Professor in the Department of Psychiatry, University of Toronto, and Staff Psychiatrist in the Anxiety Disorders Clinic, Clarke Institute of Psychiatry. She continues to be actively involved as a clinician and research in the area of OCD, particularly with respect to the genetic basis of OCD and the relationship between OCD and spectrum disorders.