Items related to The Fourth Horseman : One Man's Secret Mission... 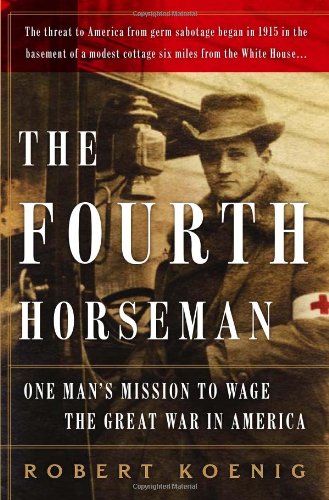 The Fourth Horseman : One Man's Secret Mission to Wage the Great War in America

The story of Anton Dilger brings to life a missing chapter in U.S. history and shows, dramatically, that the Great European War was in fact being fought on the home front years before we formally joined it. The doctor who grew anthrax and other bacteria in that rented house was an American—the son of a Medal of Honor winner who fought at Gettysburg—on a secret mission, for the German Army in 1915. The Fourth Horseman tells the startling story of that mission led by a brilliant but conflicted surgeon who became one of Germany's most daring spies and saboteurs during World War I and who not only pioneered biowarfare in his native land but also lead a last-ditch German effort to goad Mexico into invading the United States. It is a story of mysterious missions, divided loyalties, and a new and terrible kind of warfare that emerged as America—in spite of fierce dissention at home—was making the decision to send its Doughboys to the Great War in Europe.

This story has never been told before in full. And Dilger is a fascinating analog for our own troubled times. Having thrown off the tethers of obligation to family and country, he became a very dangerous man indeed: A spy, a saboteur, and a zealot to a degree that may have so embarrassed the German High Command that, after the war, they ordered his death rather than admit that he worked for them.

Robert L. Koenig, a Contributing Correspondent for Science magazine, has written about German topics for more than two decades, covering stories ranging from the fall of the Berlin Wall to revelations of atrocities in Nazi-era scientific research. He also conducted archival research into the history of germ warfare during his three years as publications director of a leading microbiology research laboratory near Washington. D.C.