Items related to Dining Out: Secrets from America's Leading Critics,... 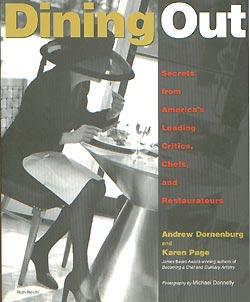 Dining Out: Secrets from America's Leading Critics, Chefs, and Restaurateurs

Quantity: 1
View all  copies of this book
Buy Used
Price: US$ 15.00 Convert Currency
Shipping: US$ 4.00 Within U.S.A. Destination, rates & speeds
Add to basket

This book is the first of its kind to examine what defines fine food in America and it introduces us to many individuals who shape our views about food. Using other successful Dornenburg/Page books as a model, the authors once again base their analysis on interviews with chefs, restaurateurs and critics. This insider's guide to the process of restaurant reviewing will excite anyone with a serious interest in food. It also features top sites on the Internet that provide restaurant reviews. 'If I were a restaurateur, I would expect all my staff to read this book. As a restaurant critic, I found it a fascinating insight into the minds of other critics and more especially the minds of some of the people who are serious about running a restaurant.'

Having written about all it takes to become a chef in Becoming a Chef, and about how those chefs do their work in Culinary Artistry, James Beard Award-winning authors Andrew Dornenburg and Karen Page have turned their attention, with Dining Out, to the subject of restaurants and restaurant critics. Restaurant owners, chefs, and critics alike get their turn to discuss the mercurial world of restaurant criticism--is the restaurant critic a valiant consumer advocate or a villainous ruiner of careers and businesses?

Dornenburg and Page interview 61 members of this "food intelligentsia" and offer the reader a snapshot of the process on either side of the kitchen door. New York Times critic Ruth Reichl notes, "I wake up in the middle of almost every night before a review is printed, agonizing over where the mistakes are.... I knew if I had called a turnip a rutabaga, my career was over." And chef Norman Van Aken says he believes "wholeheartedly in the idea of critical analysis, whether for books, movies, or restaurants. I just wish the public would understand that there are bad reviewers as well as bad reviews." Through interviews and research, Dornenburg and Page explore what it takes to become a critic, how the critics themselves feel about their power (not to mention what the restaurateurs feel), and the changing nature of what makes a great restaurant.

The book is packed with great quotes from chefs and critics, and peppered with sidebars on such handy topics as how to work with a wine steward in a restaurant to achieve the wine experience you're looking for. A lengthy appendix lists critics' favorite restaurants in more than 20 cities, and the beautiful black-and-white photographs by Michael Donnelly evoke both the fun and serious sides of restaurant life. Dining Out will appeal to foodies who delight in the behind-the-scenes stories of both chef and critic, and to anyone who's ever wondered just who those restaurant critics are, anyway.