Items related to The Best from Fantasy & Science Fiction: The Fiftieth... 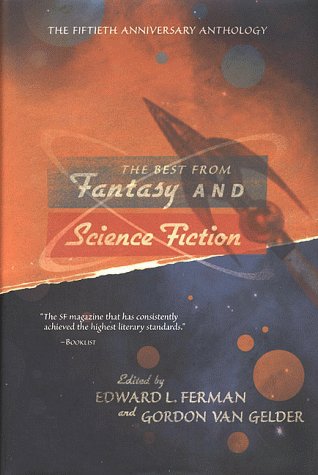 The Best from Fantasy & Science Fiction: The Fiftieth Anniversary Anthology

Quantity: 1
View all  copies of this book
Buy Used
Price: US$ 13.55 Convert Currency
Shipping: US$ 4.50 Within U.S.A. Destination, rates & speeds
Add to basket

Since its founding in 1949, The Magazine of Fantasy & Science Fiction has been acclaimed as one the pinnacles of the field, the source of fantastic fiction of the highest literary quality. In 1999, the magazine celebrated the fiftieth anthology of the best recent work from the magazine. Features 21 writers. Blue boards with copper-color lettering on spine, 381 pp., unclipped illustrated jacket. 1st Edition, 1st Printing. Very minor wear at ends of spine, unmarked, bright and clean, tight binding, nice jacket. Seller Inventory # 015055

Title: The Best from Fantasy & Science Fiction: The...

Since its founding, The Magazine of Fantasy and Science Fiction has been acclaimed as one of the pinnacles of the field, the source of fantastic fiction of the highest literary quality. Now the magazine known to its readers as "F&SF" celebrates its fiftieth anniversary with a spectacular anthology of the best recent work from the magazine.

The fiftieth anniversary collection for the most distinguished magazine of the science fiction and fantasy world.

In 1949, The Magazine of Fantasy & Science Fiction was founded upon two radical principles: to publish SF and fantasy in one volume and to emphasize literary quality. Fifty years later, F&SF is still going strong--indeed, it is the most acclaimed of SF's longest-running magazines. In honor of this achievement, publisher Edward L. Ferman and editor Gordon Van Gelder have assembled many of F&SF's finest stories from the preceding five years for The Best from Fantasy & Science Fiction: The Fiftieth Anniversary Anthology.