Items related to Where Did I Leave My Glasses?

Home Martha Weinman ALear Where Did I Leave My Glasses?
Stock Image 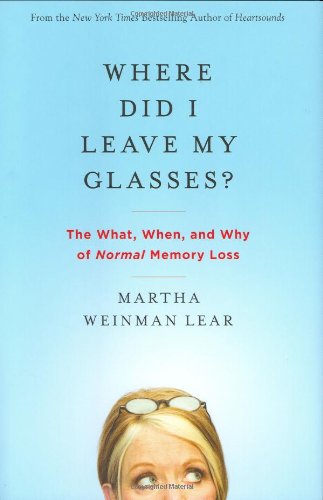 Where Did I Leave My Glasses?

Quantity: 1
View all  copies of this book
Buy Used
Price: US$ 25.00 Convert Currency
Shipping: US$ 4.00 Within U.S.A. Destination, rates & speeds
Add to basket

Title: Where Did I Leave My Glasses?

So your memory's not what it used to be? You forget people's names, or what you were just about to say, or why you went into the kitchen. Often you forget where you left your keys (your wallet, your glasses, your list of Things to Do Tomorrow). And you worry. You wonder: Could this mean I am losing it? Join the crowd, friend. there are seventy-eight million baby boomers in the country, and memory loss is the number one concern of the boomer generation. The "Worried Well," specialists call them. They worry because they do not know that most memory lapses that begin in middle age are universal and normal. Award-winning journalist Martha Lear, who gave voice to widespread frustration with medical care in her New York Times bestselling memoir Heartsounds, now explores this kind of forgetfulness--why it happens, and when, and what can be done about it. She interviews distinguished neuroscientists, psychologists, and evolutionary biologists, as well as friends and strangers about their own memory lapses. Interweaving dramatic new findings from brain-scan studies with often-hilarious anecdotes, Lear covers topics as fresh and provocative as the upside of memory loss, the differences between His and Her memories, why we are actually wired to forget, and what the future holds for memory enhancement (you can't imagine what's in store). You'll learn things you never knew before about why your memory behaves in such maddening ways. You'll find comfort and reassurance. And you'll probably find yourself on every page.

Martha Weinman Lear authored two bestselling books, Heartsounds (which was made into a Peabody award-winning film) and The Child Worshipers. A former staff writer for the New York Times Magazine, Lear continues to write articles for national magazines. She lives in New York City with her husband, screenwriter Albert Ruben.