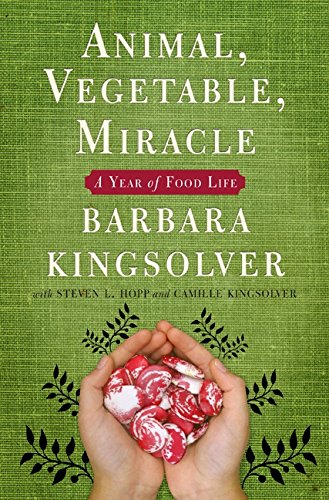 Bestselling author Barbara Kingsolver returns with her first nonfiction narrative that will open your eyes in a hundred new ways to an old truth: You are what you eat.

"As the U.S. population made an unprecedented mad dash for the Sun Belt, one carload of us paddled against the tide, heading for the Promised Land where water falls from the sky and green stuff grows all around. We were about to begin the adventure of realigning our lives with our food chain.

"Naturally, our first stop was to buy junk food and fossil fuel. . . ."

Hang on for the ride: With characteristic poetry and pluck, Barbara Kingsolver and her family sweep readers along on their journey away from the industrial-food pipeline to a rural life in which they vow to buy only food raised in their own neighborhood, grow it themselves, or learn to live without it. Their good-humored search yields surprising discoveries about turkey sex life and overly zealous zucchini plants, en route to a food culture that's better for the neighborhood and also better on the table. Part memoir, part journalistic investigation, Animal, Vegetable, Miracle makes a passionate case for putting the kitchen back at the center of family life and diversified farms at the center of the American diet.

"This is the story of a year in which we made every attempt to feed ourselves animals and vegetables whose provenance we really knew . . . and of how our family was changed by our first year of deliberately eating food produced from the same place where we worked, went to school, loved our neighbors, drank the water, and breathed the air."

When Barbara Kingsolver and her family moved from suburban Arizona to rural Appalachia, they took on a new challenge: to spend a year on a locally produced diet, paying close attention to the provenance of all they consumed. Concerned about the environmental, social, and physical costs of American food culture, they hoped to recover what they consider our nation’s lost appreciation for farms and the natural processes of food production. Since 2007, their experiment has evolved enormously. In this special anniversary edition, featuring a new epilogue by the entire Kingsolver family, they discuss how the project has grown. Not only have they incorporated their food values into all of their lives, but Steven now runs a farm-to-table restaurant and community development venture that trains young farmers in their area to move into sustainable food production.

With Americans’ growing worry about the toll of an industrial food system on their health and environment, the Kingsolver family’s experiences and observations remain just as relevant today as they were ten years ago. Animal, Vegetable, Miracle is a modern classic that will endure for years to come.