Items related to Guatemala after the Peace Accords (Ilas Series) 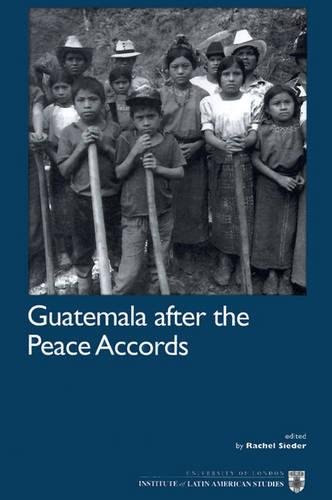 Publisher: U.S.A.: Institute for the Study of the Americas

One of the longest and seemingly most intractable civil wars in Latin America was brought to an end by the signing of the Peace Accords between the Guatemalan government and the Unidad Revolucionaria Nacional Guatemalteca (URNG) in December 1996. The essays in this volume evaluate progress made in the implementation of the peace agreements and signal some of the key challenges for future political and institutional reform. The volume opens with a chapter by Gustavo Porras, the government's main negotiator in the peace process. The first section then examines the issue of demilitarization. This is followed by aspects of indigenous rights in the peace process, including conceptual frameworks for rights advancement, the harmonization of state law and customary law, and the challenges of nation-state and citizenship construction. The next section examines issues of truth, justice, and reconciliation, and assesses prospects for the Truth Commission. The volume closes with an analysis of different aspects of political reform in Guatemala and includes comments made on the chapters and developed in the debate which took place at the conference on which it is based. The contributors are Marta Altolaguirre*, Marta Elena Casaús*, Demetrio Cojtí*, Edgar Gutiérrez*, Frank La Rue, Roger Plant, Gustavo Porras*, Alfonso Portillo*, Jennifer Schirmer, Rachel Sieder, David Stoll, Rosalina Tuyuc*, Anna Vinegrad, Richard Wilson (* chapters in Spanish).

Rachel Sieder, a lecturer in politics at the Institute of Latin American Studies, University of London, is author of Customary Law and Democratic Transition in Guatemala and an associate researcher at the Latin American Faculty of Social Science (FLACSO) in Guatemala City.