Items related to The Hunter, The Hammer, and Heaven: Journeys to Three... 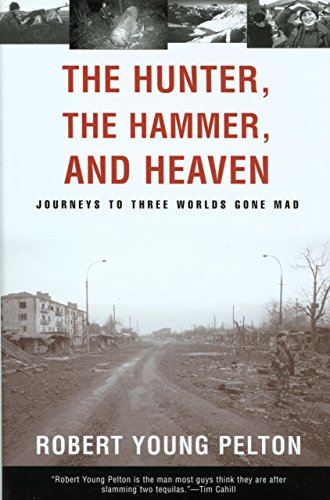 The Hunter, The Hammer, and Heaven: Journeys to Three Worlds Gone Mad

Quantity: 1
View all  copies of this book
Buy New
Price: US$ 40.00 Convert Currency
Shipping: US$ 4.00 Within U.S.A. Destination, rates & speeds
Add to basket

Title: The Hunter, The Hammer, and Heaven: Journeys...

A firsthand exploration of war and the people who survive it in three of the most war-ravaged countries on earth: Sierra Leone, Chechnya, and Bougainville.

As the author of The World's Most Dangerous Places, Robert Young Pelton has come to know some of the most unusual and dangerous individuals in the world. In The Hunter, the Hammer, and Heaven he introduces an extraordinary cast of characters from three of the most war-ravaged countries on earth - the West African country of Sierra Leone, the breakaway republic of Chechnya, and a mysterious land in the South Pacific called Bougainville, In each location he provides a firsthand exploration of important new developments in conflict, and a unique insight into the forces that are shaping the world's future. In the Hunter, Pelton journeys into the postapocalyptic darkness of Sierra Leone - a small, shattered country emerging from a decade of cruel and nihilistic warfare. As he wanders through the world's most expensive peace-keeping mission, he meets an ex-mercenary who hunts pirates, a ragtag militia whose members believe they have supernatural powers, and white men with "diamond fever." In the Hammer, Pelton enters the jihad in Chechnya with three traveling companions - an American mujahid who wants to die, a young woman entering her first war as a journalist, and a grumpy cameraman. Pelton brings his motley crew along the secret muj trail from America to Georgia to meet the Chechen rebels as the Russian Army sends in a massive army of 150,000 soldiers to subdue the anarchistic republic in their own "War on Terror." His odyssey through terrorist-filled bunkers, suicide squad-manned front lines, SCUD missile attacks, and terrified citizens leads to a desperate escape from the beleaguered city of Grozny. In Heaven, Pelton chronicles his two-year odyssey to meet one of the most elusive rebel leaders in the world - an enigmatic man named Francis Ona who has survived numerous assassination attempts and who threatens to kill any white man who sets foot on his tiny island in the South Pacific. In the course of his travels Pelton meets a cast of colorful and sometimes hilarious characters, from a drunken guide who offers his niece to visitors, to accountants who offer complete armies to desperate governments. As Pelton makes his way to the misty island of Bougainville and closer to Francis Ona, he discovers that the mysterious leader is convinced that Pelton is coming to kill him. Filled with tension and intrigue, The Hunter, The Hammer, and Heaven offers a dramatic vision of war and the people who survive it.