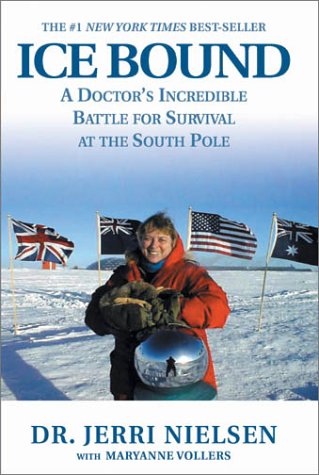 Ice Bound: A Doctor's Incredible Battle for Survival at the South Pole

During the winter of 1999, Dr. Jerri Nielsen, the only physician on a staff of forty-one people, discovered a lump in her breast. Consulting via satellite e-mail with doctors in the United States, she was forced to perform a biopsy and treat herself with chemotherapy in order to ensure that she could survive until conditions permitted her rescue. She was eventually rescued by the Air National Guard. Dr. Jerri Nielsens story of her transforming experiences is a thrilling adventure and moving drama. She has written a new chapter for this edition. Since the publication of Ice Bound in hardcover in January 2000, Dr. Nielsen has inspired people throughout the country, met hundreds of fans, received numerous awards including Irish American of the Year, which was presented to her by Hillary Clinton, as well as tremendous praise from the media.

Serving as doctor to the Americans "wintering over" at the South Pole in 1999, Jerri Nielsen made headlines when she discovered a lump in her breast that a self-administered biopsy revealed to be an aggressive, fast-growing cancer. No flights in or out of Antarctica are possible during the continent's long winter, and Nielsen's account of giving herself chemotherapy while she and her fellow "Polies" waited for the weather to break is even more gripping than the news reports at the time. She's candid about her pain and fear; the media battle waged by her embittered ex-husband makes her ordeal even more challenging. Interestingly enough, however, this high drama does not overshadow Nielsen's deeper narrative of a woman who came "to the Ice" seeking new meaning in a life shattered by divorce and estrangement from her children. In the back-to-basics world of Antarctic medicine, with outdated equipment, few supplies, and no assistants, she rediscovered her vocation as a doctor, free from the imperatives of corporate-directed medicine. More importantly, Nielsen found spiritual solace in the world's most extreme environment, where she was "introduced slowly to the notion of giving more than you have and using less than you need ... of knowing that all you really own are your own thoughts." She makes the glories of the Pole so palpable that, by the end, readers will not even be surprised when she signs an e-mail to her family, "from the wonderful Ice." --Wendy Smith