Items related to My Prison Without Bars: Pete Rose 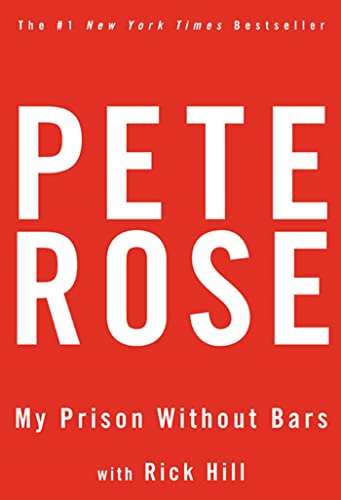 My Prison Without Bars: Pete Rose

PETE ROSE HOLDS MORE MAJOR LEAGUE BASEBALL RECORDS THAN ANY OTHER PLAYER IN HISTORY. He stands alone as baseball's hit king having shattered the previously "unbreakable" record held by Ty Cobb. He is a blue-collar hero with the kind of old-fashioned work ethic that turned great talent into legendary accomplishments.

Pete Rose is also a lifelong gambler and a sufferer of oppositional defiant disorder. For the past 13 years, he has been banned from baseball and barred from his rightful place in the Hall of Fame-- accused of violating MLB's one taboo. Rule 21 states that no one associated with baseball shall ever gamble on the game. The punishment is no less than a permanent barring from baseball and exclusion from the Hall of Fame.

Pete Rose has lived in the shadow of his exile. He has denied betting on the game that he loves. He has been shunned by MLB, investigated by the IRS, and served time for tax charges in the U.S. Penitentiary in Marion, Illinois.

But he's coming back.

Pete Rose has never been forgotten by the fans who loved him throughout his 24-year career. The men he played with have stood by him. In this, his first book since his very public fall from grace, Pete Rose speaks with great candor about all the outstanding questions that have kept him firmly in the public eye. He discloses what life was like behind bars, discusses the turbulent years of his exile, and gives a vivid picture of his early life and baseball career. He also confronts his demons, tackling the ugly truths about his gambling and his behavior.

MY PRISON WITHOUT BARS is Pete Rose's full accounting of his life. No one thinks he's perfect. He has made mistakes-- big ones. And he is finally ready to admit them.

Pete Rose's My Prison Without Bars is written for a purpose: to make Pete Rose's case for the Hall of Fame. On paper, Rose's credentials seem unassailable. The all-time career hits leader, Rose owns seven Major League and twelve National League records from his 24 years in baseball.

The controversy comes down to Major League Baseball's Rule 21: "Any... employee, who shall bet any sum whatsoever upon any baseball game in connection with which the bettor has a duty to perform shall be declared permanently ineligible." In 1989 Rose was suspended from baseball after allegations that he gambled on the sport, allegations Rose denied. Thereafter, fans and sportswriters have speculated that baseball officials would re-instate Rose if only he admitted his guilt. In the book, Rose confesses--for the first time--that he did in fact bet on Reds games while he managed the team, though he claims that he never bet against the Reds. This would seem to be the "coming clean" that baseball was looking for.

Rose, however, doesn't seem ready to give up his fight. The book attacks John Dowd and Commissioner Bart Giamatti for the 1989 report which ultimately led to Rose's suspension. Rose picks apart the report showing that the evidence was either falsified or from unreliable sources. Yet, he admits that the document's conclusion--that he bet on baseball--was accurate. Rose declares guilt but still seems to believe, as he says, that gambling is a "victimless crime" and that his punishment does not fit the crime. He won't "act sorry or sad or guilty" because he is "just not built that way."

Admirers of Rose the athelete will likely be disappointed by the book. After a too-short recollection of his life in baseball, Rose dwells heavily on the gamblers, bookmakers, runners, and memorabilia dealers who made up his world when he could no longer compete as a player. In the end, My Prison Without Bars is an interesting historical document in one of the greatest baseball scandals of all time, but those looking for a record of Rose's amazing baseball achievements are better off consulting The New Bill James Historical Baseball Abstract. --Patrick O'Kelley