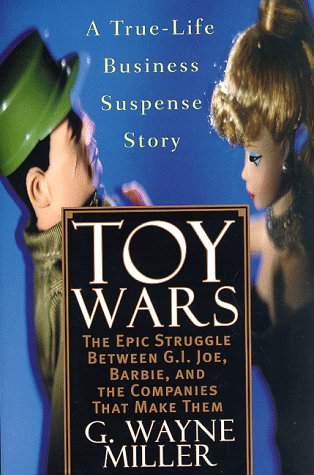 Toy Wars: The Epic Struggle Between G.I. Joe, Barbie, and the Companies That Make Them

This is the real toy story, an unprecedented behind-the-scenes journey through a world of influence, fantasy, and multimillion-dollar Hollywood deals, a world where the whims of children make millionaires and topple titans.

This is also the story of an unusual man.  Alan Hassenfeld, the chief executive officer of Hasbro, never intended to run a Fortune 500 company.  A free spirit who dreamed of being a writer and exploring Asia, he was content to remain in the shadow of his older brother Stephen, a marketing genius who transformed a family firm established by immigrant Jews into powerhouse and Wall Street darling.

Then tragedy struck.  Stephen, and intensely private man, died of AIDS, a disease he had not acknowledged he had, even to his family.  Alan Hassenfeld was named CEO, just as Hasbro was facing a daunting onslaught of challenges.  Toy Wars is about Alan's struggle to balance the demands of the bottom line with his ideals about the kind of toys children deserve, as well as the ethical obligations of management.

Wayne Miller, an award-winning journalist and novelist, was granted unprecedented access to Hasbro, the maker of G.I. Joe, Star Wars toys, Mr. Potato Head, Batman, Monopoly, Scrabble, Trivial Pursuit, and countless other favorites.  For five years, he sat in on design sessions, marketing meetings, and focus groups, and interviewed employees in every part of the company.  He witnessed a major corporate restructuring; crucial deal with Dreamworks SKG; a hostile takeover bid by archrival Mattel; the collapse of a $45 million virtual reality game; and the company makeover of G.I. Joe, Hasbro's flagship product and one of the most popular toys of all time.

Toy Wars is filled with many colorful characters, including:

Mighty Morphin Power Rangers creator Haim Saban, who tapped into a popular Japanese TV series and made it a worldwide television and merchandising phenomenon

Mattel CEO Jill Barad, the second-highest-paid woman in corporate America, who promotes and defends Barbie with the zeal of a religious crusader

Hasbro executive Al Verrecchia, the loyal second in command who did not let friendship or tradition stand in the way of a dramatic restructuring

Larry Bernstein, arguably the best toy salesman ever, a riotous raconteur whose divisional presidency crumbled when he was unable to meet Hasbro's profit goals

Rich in family drama and written with sly wit, Toy Wars is a deeply compelling business story, a fascinating tour through a billion-dollar industry that exerts tremendous influence on the lives of children everywhere.

Although it may seem to outsiders like a playful pursuit, manufacturing and marketing toys is not all fun and games. Toy Wars: The Epic Struggle Between G.I. Joe, Barbie, and the Companies That Make Them, by journalist and novelist G. Wayne Miller, reveals the realities of the business and the people behind it. By focusing on Fortune 500 toymaker Hasbro and the Hassenfeld family, which has guided the company since its founding some nine decades ago, Miller offers a rare insider look at this unique industry.