Items related to Fork It over: The Intrepid Adventures of a Professional...

Home Richman, Alan Fork It over: The Intrepid Adventures of a Professional Eater
Stock Image 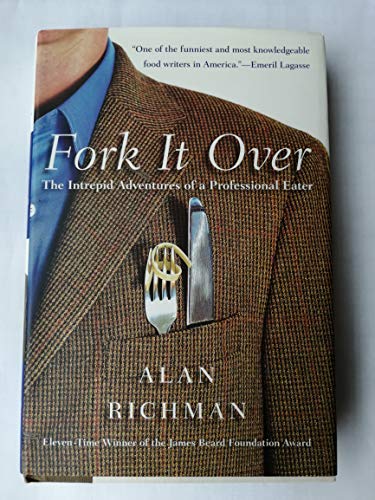 Fork It over: The Intrepid Adventures of a Professional Eater

Quantity: 1
View all  copies of this book
Buy Used
Price: US$ 8.00 Convert Currency
Shipping: US$ 5.00 Within U.S.A. Destination, rates & speeds
Add to basket

Title: Fork It over: The Intrepid Adventures of a ...

Alan Richman has dined inmore unlikely locations and devoured more tasting menus than any three other food critics combined. Over the decades, his editors have complained incessantly about his expense accounts but never about his appetite. He has reviewed restaurants in all the best Communist countries (China, Vietnam, Cuba) and supped heartily all over the free world. Wherever he's gone, GQ magazine's acclaimed food, wine, and restaurant critic has brought along his impeccable palate, Herculean constitution, and biting humor.

In this globe-trotting literary smorgasbord, the eleven-time winner of the James Beard Foundation Award for food writing retraces his most savory culinary adventures. Richman's inexhaustible hunger and unquenchable curiosity take him to the best restaurants and most irresistible meals, from Monte Carlo to Corona, Queens. He seeks out the finest barbecue in America -- it's in Ayden, North Carolina, by the way -- the costliest sushi in Los Angeles, and the most perfumed black truffles in France. Along the way he has studied at Paul Bocuse's cooking school in Lyon (and failed), moonlighted as a sommelier in New York (and failed), and charmed his way through a candlelight dinner with actress Sharon Stone (and failed big time).

Through it all -- roughly 50,000 meals and still counting -- one thing is certain: Alan Richman has never come to a fork in the road without a fork in his hand.

It seems like Alan Richman has been writing about food--certainly in GQ--like, forever. Turns out he made the switch from sports writing to food, primarily restaurant reviews, a mere 14 years ago. Fork It Over is his first collection of essays published in those years. He has a charming, easy voice; self-deprecating humor; well-honed wit; and a defined sense of what he does and does not like--about food, restaurants, cities, hotel rooms, waiters, and just about everything else. You are a passenger along for the ride, a willing listener of road stories. The car is decidedly American, the upholstery fine leather.

The collection is laid out like a classic menu of French parentage. In Amuse-Bouche, we are treated to "The Eating Life," an essay written for the book that establishes the writer-critic credentials and ground rules. His mother was a terrific cook; the author can't boil water, nor sees any need to. He's a regular guy from a regular background who can wax as poetic about Philly cheese steak as he can the most delectable and exotic of delicacies. From that point on--through Appetizers, Entrees, Sides, Cheese, Wine, and Gratuity--the reader is escorted from one side of the world to the other, to high-end restaurants and low-end dives. As the fellow traveler, the reader is never allowed to wander off from Richman's voice and perspective. He is, in fact, the axis mundi around which each and every essay revolves. Which is to say, Fork It Over is much more a book about Alan Richman than it is about food.

The essays that comprise Fork It Over appeared in major monthly magazines, one at a time. To read this body of work cover to cover is to run the risk of losing one's appetite in the middle of the meal. It's rich stuff. Delectable. Charming. And a little bit goes a long way. --Schuyler Ingle