Items related to Shadow of the Hegemon 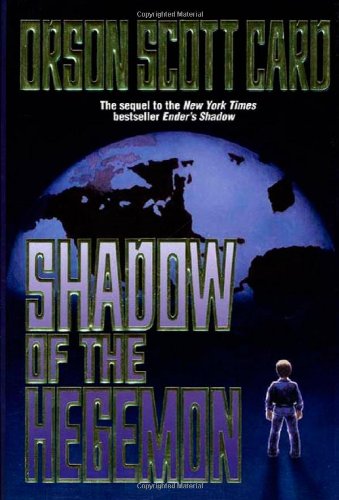 Shadow of the Hegemon

Quantity: 1
View all  copies of this book
Buy Used
Price: US$ 9.30 Convert Currency
Shipping: US$ 4.50 Within U.S.A. Destination, rates & speeds
Add to basket

Title: Shadow of the Hegemon

The War is over, won by Ender Wiggin and his team of brilliant child-warriors. The enemy is destroyed, the human race is saved. Ender himself refuses to return to the planet, but his crew has gone home to their families, scattered across the globe. The battle school is no more.

But with the external threat gone, the Earth has become a battlefield once more. The children of the Battle School are more than heroes; they are potential weapons that can bring power to the countries that control them. One by one, all of Ender's Dragon Army are kidnapped. Only Bean escapes; and he turns for help to Ender's brother Peter.

Peter Wiggin, Ender's older brother, has already been manipulating the politics of Earth from behind the scenes. With Bean's help, he will eventually rule the world.

Orson Scott Card finally explores what happened on earth after the war with the Buggers in the sixth book of his Ender series, Shadow of the Hegemon. This novel is the continuation of the story of Bean, which began with Ender's Shadow, a parallel novel to Card's Hugo and Nebula Award-winning Ender's Game.

While Ender heads off to a faraway planet, Bean and the other brilliant children who helped Ender save the earth from alien invaders have become war heroes and have finally been sent home to live with their parents. While the children try to fit back in with the family and friends they haven't known for nearly a decade, someone's worried about their safety. Peter Wiggins, Ender's brother, has foreseen that the talented children are in danger of being killed or kidnapped. His fears are quickly realized, and only Bean manages to escape. Bean knows he must save the others and protect humanity from a new evil that has arisen, an evil from his past. But just as he played second to Ender during the Bugger war, Bean must again step into the shadow of another, the one who will be Hegemon.

In Shadow of the Hegemon, Card can't help but fall back into old patterns. But while the theme is the same as in previous books--brilliant, tragic children with the fate of the human race resting on their shoulders--Shadow of the Hegemon does a wonderful job of continuing Bean's tale against a backdrop of the politics and intrigue of a fragile earth. While the novel is accessible, new readers to the series would be wise to begin with Ender's Game or Ender's Shadow. --Kathie Huddleston