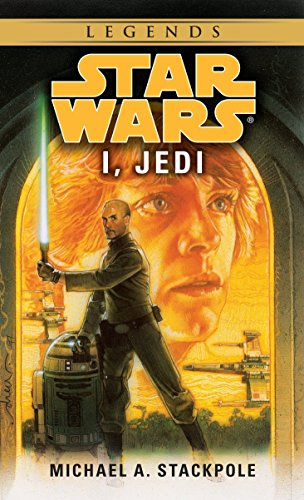 Quantity: 1
View all  copies of this book
Buy Used
Price: US$ 5.95 Convert Currency
Shipping: US$ 6.00 From Canada to U.S.A. Destination, rates & speeds
Add to basket

New York Times bestselling author Michael A. Stackpole presents a stirring new tale set in the Star Wars® universe: the dramatic story of a heroic X-wing pilot on the razor's edge between the Force--and the dark side.

Corran Horn has distinguished himself as one of the best and brightest of Rogue Squadron's elite fighting force. Then his wife, Mirax, vanishes on a covert mission for the New Republic, and Corran vows to find her. To do so, he knows he must develop the latent Force powers inherited from his grandfather, a legendary Jedi hero. He joins Luke Skywalker's famed Jedi academy to begin training, only to quit in frustration at Skywalker's methods. Now Corran is on his own. Using his Corellian undercover experience, he must infiltrate, sabotage, and destroy a ruthless organization in order to find his wife. But to succeed, Corran will have to come to terms with his Jedi heritage--and make a terrible choice: surrender to the dark side...or die.
© 1999 Lucasfilm Ltd. & TM
All rights reserved. Used under authorization.

Corran Horn, hero of Rogue Squadron and former Corellian Security Force officer, has a problem: his wife, Mirax, has disappeared while on a secret mission. In his struggle to rescue his wife, Horn joins Luke Skywalker's Jedi academy as a charter recruit, befriends Mara Jade, tangles with a 4,000-year-old Sith lord, and goes undercover to infiltrate a notorious band of pirates. But what will he do when he finds himself faced with a dilemma--surrender to the dark side of the force or risk losing Mirax forever?

This abridgment (though approved by the licensor) causes some serious gaps in the story--major events are merely mentioned in passing, while others are described in great detail--but fans may be placated by sound effects and John Williams's music from the original Star Wars Trilogy. Tony Award-nominee Anthony Heald performs with his usual aplomb, providing distinctive voices for a wide range of characters and heightening the tension when necessary. (Running time: three hours, two cassettes) --C.B. Delaney