Items related to Descartes' Bones: A Skeletal History of the Conflict... 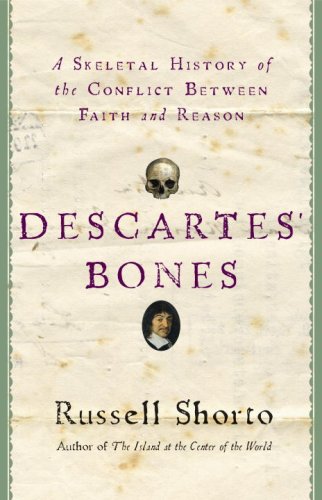 Descartes' Bones: A Skeletal History of the Conflict between Faith and Reason

Title: Descartes' Bones: A Skeletal History of the ...

On a brutal winter's day in 1650 in Stockholm, the Frenchman René Descartes, the most influential and controversial thinker of his time, was buried after a cold and lonely death far from home. Sixteen years later, the French Ambassador Hugues de Terlon secretly unearthed Descartes' bones and transported them to France.

Why would this devoutly Catholic official care so much about the remains of a philosopher who was hounded from country to country on charges of atheism? Why would Descartes' bones take such a strange, serpentine path over the next 350 years—a path intersecting some of the grandest events imaginable: the birth of science, the rise of democracy, the mind-body problem, the conflict between faith and reason? Their story involves people from all walks of life—Louis XIV, a Swedish casino operator, poets and playwrights, philosophers and physicists, as these people used the bones in scientific studies, stole them, sold them, revered them as relics, fought over them, passed them surreptitiously from hand to hand.

The answer lies in Descartes’ famous phrase: Cogito ergo sum—"I think, therefore I am." In his deceptively simple seventy-eight-page essay, Discourse on the Method, this small, vain, vindictive, peripatetic, ambitious Frenchman destroyed 2,000 years of received wisdom and laid the foundations of the modern world. At the root of Descartes’ “method” was skepticism: "What can I know for certain?" Like-minded thinkers around Europe passionately embraced the book--the method was applied to medicine, nature, politics, and society. The notion that one could find truth in facts that could be proved, and not in reliance on tradition and the Church's teachings, would become a turning point in human history.

In an age of faith, what Descartes was proposing seemed like heresy. Yet Descartes himself was a good Catholic, who was spurred to write his incendiary book for the most personal of reasons: He had devoted himself to medicine and the study of nature, but when his beloved daughter died at the age of five, he took his ideas deeper. To understand the natural world one needed to question everything. Thus the scientific method was created and religion overthrown. If the natural world could be understood, knowledge could be advanced, and others might not suffer as his child did.

The great controversy Descartes ignited continues to our era: where Islamic terrorists spurn the modern world and pine for a culture based on unquestioning faith; where scientists write bestsellers that passionately make the case for atheism; where others struggle to find a balance between faith and reason.
Descartes’ Bonesis a historical detective story about the creation of the modern mind, with twists and turns leading up to the present day—to the science museum in Paris where the philosopher’s skull now resides and to the church a few kilometers away where, not long ago, a philosopher-priest said a mass for his bones.

RUSSELL SHORTO is the bestselling author of The Island at the Center of the World and a contributing writer at the New York Times Magazine. He lives in Amsterdam.