Items related to Welfare Ranching: The Subsidized Destruction of the... 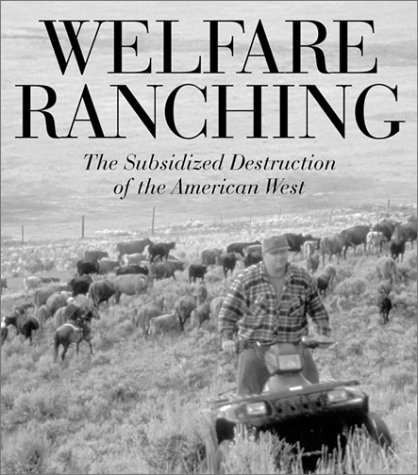 Welfare Ranching: The Subsidized Destruction of the American West

Quantity: 1
View all  copies of this book
Buy Used
Price: US$ 27.00 Convert Currency
Shipping: US$ 5.00 Within U.S.A. Destination, rates & speeds
Add to basket

Welfare Ranching reveals the deplorable practices that are ripping apart the ecological fabric of the arid West, where subsidized livestock grazing occurs on more than 300 million acres of publicly owned land. The book offers a graphic look at the consequences of using taxpayer dollars to turn the West into a giant feedlot for cattle and sheep - the slaughter of predators, a growing number of endangered species, polluted rivers and streams, an increase in soil erosion, and weed invasion, to name just a few. Through dramatic photographs and scientifically supported essays, the book shows that wherever cattle are grazing at the public trough, severe and sometimes irreversible ecological damage results. Fauna of all kinds are extirpated, endangered, or driven to extinction; riparian zones are trammeled and degraded; introductions of exotic grasses and foiled mitigation attempts abound. For years the true impacts of livestock grazing have gone unnoticed as the landscape has been altered slowly over time, making the changes difficult to discern. With more than 150 powerful photographs, Welfare Ranching vividly illustrates the difference between lands appropriated for livestock productio

George Wuerthner is the ecological projects director for the Foundation for Deep Ecology, where he does research and writes about environmental issues. For many years he was a full-time freelance photographer and writer and has published thirty-eight books on natural history, conservation history, ecology, and environmental issues.