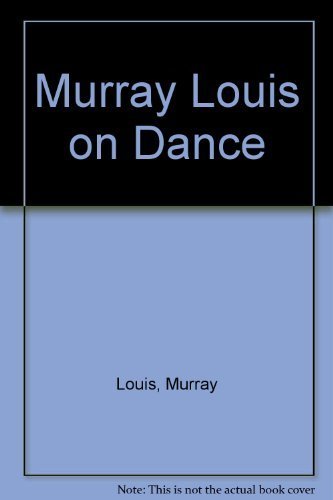 Murray Louis On Dance, written by one of today's great dancers, choreographers, and teachers, reveals what it's really like to be a performing artist. Part philosophy, part history, and part autobiography, this tender and witty work takes the reader on an odyssey from a Brooklyn orphanage where Louis was raised to the great concert halls of the world, home to some of his personal triumphs. Along the way, he introduces many memorable characters, including Essie, the dancer determined to perform despite her personal limitations, and a chance encounter with an air-conditioner repairman, who helped save Louis's performing career. In On Dance, Louis is unafraid to move from the sacred (what are the roots of creativity?) to the mundane (why are all dressing rooms dimly lit, drafty closets?)
A dancer's life is not all leaps, turns, and curtain calls; behind the grace, agility, and speed lie years of training, injury, financial duress, and the struggle that underlies every dancer's career. In a series of engaging essays, Louis tackles diverse subjects including the drive to perform, the grueling life of a touring artist, and the relentless quest for perfection, both physical and mental. Louis is a remarkable writer, capturing the fears and joys, near-disasters and triumphs that every performing artist must face.
From the Lascaux cave paintings executed by anonymous artists thousands of years ago to today's urban caverns, subway stops decorated by unknown hands with splattered graffiti, the artist strives to leave his indelible mark on our culture. Through his dance works and writings, Murray Louis is a compelling voice for an essential issue facing our time: the survival of human values in an increasingly hostile world. Murray Louis: On Dance celebrates the triumph of the artist over adversity, and will be an inspiration to dance viewers and anyone who aspires to a career in the arts.

Dancer, choreographer and teacher Louis (Inside Dance) has long been one of dance's more eloquent and provocative voices. Here he presents 21 meditative essays on his art, written from an intensely personal perspective. Born during the Great Depression, Louis spent his formative years in a Brooklyn orphanage, without access to formal dance training. However, his lifelong dance compulsion--together with his grit--led to an eminent 45-year career. The glory of a dancer's powers and the crushing fall of the final curtain both come under Louis's passionate eye. He touches on topics firom the mundane reality of classes, calluses, and coffee to the mystical call of the sixth sense. His tone ranges from the solemn pronouncements of an incurable Romantic to the irreverent musings of a veteran trouper. Essays address such neglected topics as Sex and Sexuality, a long-suppressed subject at the very core of dance, as well as Dressing Rooms, Benefactors and death. Louis's seasoned reflections are bound to spur agreement and disagreement--sometimes in the same paragraph. Yet, unlike the customary artist's autobiography, this volume could well achieve the status of a new talisman for dancers and their public.
Copyright 1992 Reed Business Information, Inc.