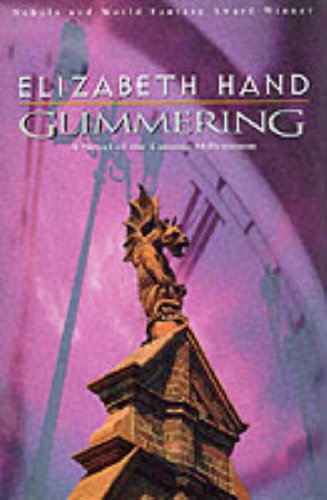 Quantity: 1
View all  copies of this book
Buy Used
Price: US$ 6.55 Convert Currency
Shipping: US$ 4.50 Within U.S.A. Destination, rates & speeds
Add to basket

It is 1999. The Last Days, say some; the First, say others. The climate has altered irrevocably, the cities have imploded into vicious shards, and the stars haven't been seen for months. The sky is a shimmering arras of reds and greens and golds, the result of global warming, it is thought.
Jack Finnegan, publisher of the world's last literary magazine, is dying of AIDS while he watches the floodwaters rise toward his decaying mansion on the Hudson. Trip Marlowe, a rock star addicted to the wild glories of the hallucinogenic drug IZE, is immortalizing himself as a digital VR icon. Marz Candry, the "Hyacinth Girl" blooming under the canopy of the Glimmering, is waiting to bear Trip's child, while the fellahin and their underground cults are preparing the frenzies of the Night of the Thousand Years.
All these and more are drawn in to the seductive web of Leonard Thrope, the Warhol-like "sociocultural pathologist" who arrives from the East with his entourage bearing a gift: an elixir developed by an exiled scientist in a Tibetan lamasery. Jack (who tries everything, on principle) finds he is no longer HIV positive, no longer dying. Thanks to Fusax, something far more terrible, far more wonderful, far more unexpected is about to happen to Jack Finnegan and his world.

In 1999 the world has gone to hell: global warming, AIDS, urban decay, environmental disasters, and, above it all, the Glimmering. The Glimmering is an accident of modern society, a phenomenon that is destroying the ozone layer and killing the earth. In these last days, Jack Finnegan, suffering from AIDS, has come home to his family's decaying Manhattan mansion to die. He will meet Trip Marlowe, a rock star hooked on the hallucinogenic IZE, and unknowingly play out a bizarre drama scripted by his former lover, the "sociocultural pathologist" Leonard Thrope. You won't be able to put down this engrossing tale.