Items related to You Don't Always Get What You Pay For: The Economics...

Home Elliott D. Sclar You Don't Always Get What You Pay For: The Economics of ...
Stock Image 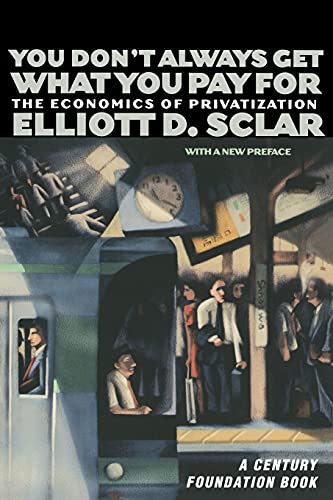 You Don't Always Get What You Pay For: The Economics of Privatization (A Century Foundation Book)

Today, nearly all public services―schools, hospitals, prisons, fire departments, sanitation―are considered fair game for privatization. Proponents of privatization argue that private firms will respond to competitive market pressures and provide better service at lower cost. While this assertion has caused much controversy, the debate between both sides has consisted mainly of impassioned defenses of entrenched positions.

In You Don't Always Get What You Pay For, Elliott D. Sclar offers a balanced look at the pitfalls and promises of public sector privatization in the United States. By describing the underlying economic dynamics of how public agencies and private organizations actually work together, he provides a rigorous analysis of the assumptions behind the case for privatization.

The competitive-market model may seem appealing, but Sclar warns that it does not address the complex reality of contracting for government services. Using specific examples, such as mail service and urban transportation, he shows that ironically privatization does not shrink government―the broader goal of many of its own champions. He also demonstrates that there is more to consider in providing public services than trying to achieve efficiency; there are issues of equity and access that cannot be ignored.

Sclar believes that public officials and voters will soon realize the limitations of "contracting out" just as private corporations have come to understand the drawbacks of outsourcing. After examining the effectiveness of alternatives to privatization, he offers suggestions for improving public sector performance―advice he hopes will be heeded before it is too late.

Elliott D. Sclar is Professor of Urban Planning at Columbia University, where he is also director of Graduate Programs in Urban Planning. An economist by training, he is a research associate at the Economic Policy Institute in Washington, D.C. Sclar is the co-author of several books, including Access for All: Transportation and Urban Growth and Shaky Palaces: Home Ownership and Social Mobility in Boston's Suburbanization.