Items related to Meet the Press: 50-Years of History in the Making 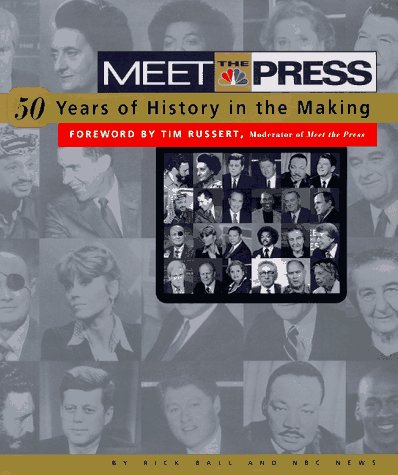 Meet the Press: 50-Years of History in the Making

Quantity: 1
View all  copies of this book
Buy Used
Price: US$ 9.00 Convert Currency
Shipping: US$ 5.00 Within U.S.A. Destination, rates & speeds
Add to basket

Chronicles the program's radio and television history, including featured journalists, newsmakers, and events

"If it's Sunday, it's Meet the Press!" On November 6, 1947, Meet the Press made its network debut. Now, 50 years and an astonishing 2500 shows later, the most influential news program in the history of television is celebrated in MEET THE PRESS: 50 Years of History in the Making. GRAB A FRONT-ROW SEAT to the world events of the past five decades as seen through the lens of this groundbreaking show. MEET THE PRESS: 50 Years of History in the Making spotlights the newsmakers, the journalists, and the issues that have shaped today's world. Meet the Press is the one news show that both reports on the news and makes it-breaking more "next day" headlines than any other show. Now, in honor of the show's golden anniversary, NBC and the show's producers open the archives of videotapes, rare photographs, transcripts, and revealing private anecdotes to recreate the program's history-making highlights. MEET THE PRESS: 50 Years of History in the Making captures all the drama and the excitement of the show that millions of views, newsmakers, world leaders, and journalists consider a national treasure. "Meet the Press... the newsiest and most influential of the Sunday morning shows."-National Journal "... the most tough minded panel show."-William Safire, The New York Times "Meet the Press has emerged... as the favorite of Sunday morning viewers in the nation's capital."-USA Today "Meet the Press... it's the preeminent political talk show."-TV Guide.