Items related to Nickel and Dimed: On (Not) Getting by in America

Home Ehrenreich, Barbara Nickel and Dimed: On (Not) Getting by in America
Stock Image 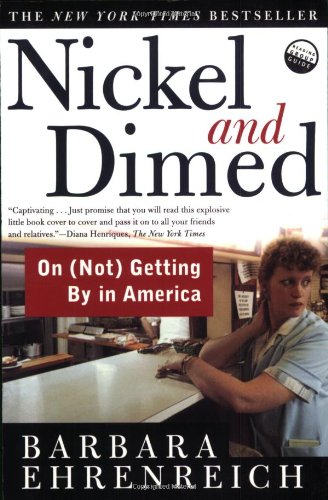 Nickel and Dimed: On (Not) Getting by in America

The New York Times bestseller, and one of the most talked about books of the year, Nickel and Dimed has already become a classic of undercover reportage.

Millions of Americans work for poverty-level wages, and one day Barbara Ehrenreich decided to join them. She was inspired in part by the rhetoric surrounding welfare reform, which promised that any job equals a better life. But how can anyone survive, let alone prosper, on $6 to $7 an hour? To find out, Ehrenreich moved from Florida to Maine to Minnesota, taking the cheapest lodgings available and accepting work as a waitress, hotel maid, house cleaner, nursing-home aide, and Wal-Mart salesperson. She soon discovered that even the "lowliest" occupations require exhausting mental and physical efforts. And one job is not enough; you need at least two if you intend to live indoors.

Nickel and Dimed reveals low-wage America in all its tenacity, anxiety, and surprising generosity -- a land of Big Boxes, fast food, and a thousand desperate strategies for survival. Instantly acclaimed for its insight, humor, and passion, this book is changing the way America perceives its working poor.

Essayist and cultural critic Barbara Ehrenreich has always specialized in turning received wisdom on its head with intelligence, clarity, and verve. With some 12 million women being pushed into the labor market by welfare reform, she decided to do some good old-fashioned journalism and find out just how they were going to survive on the wages of the unskilled--at $6 to $7 an hour, only half of what is considered a living wage. So she did what millions of Americans do, she looked for a job and a place to live, worked that job, and tried to make ends meet.

As a waitress in Florida, where her name is suddenly transposed to "girl," trailer trash becomes a demographic category to aspire to with rent at $675 per month. In Maine, where she ends up working as both a cleaning woman and a nursing home assistant, she must first fill out endless pre-employment tests with trick questions such as "Some people work better when they're a little bit high." In Minnesota, she works at Wal-Mart under the repressive surveillance of men and women whose job it is to monitor her behavior for signs of sloth, theft, drug abuse, or worse. She even gets to experience the humiliation of the urine test.

So, do the poor have survival strategies unknown to the middle class? And did Ehrenreich feel the "bracing psychological effects of getting out of the house, as promised by the wonks who brought us welfare reform?" Nah. Even in her best-case scenario, with all the advantages of education, health, a car, and money for first month's rent, she has to work two jobs, seven days a week, and still almost winds up in a shelter. As Ehrenreich points out with her potent combination of humor and outrage, the laws of supply and demand have been reversed. Rental prices skyrocket, but wages never rise. Rather, jobs are so cheap as measured by the pay that workers are encouraged to take as many as they can. Behind those trademark Wal-Mart vests, it turns out, are the borderline homeless. With her characteristic wry wit and her unabashedly liberal bent, Ehrenreich brings the invisible poor out of hiding and, in the process, the world they inhabit--where civil liberties are often ignored and hard work fails to live up to its reputation as the ticket out of poverty. --Lesley Reed