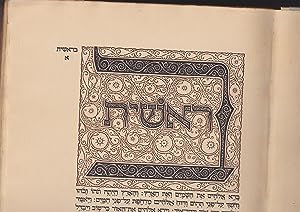 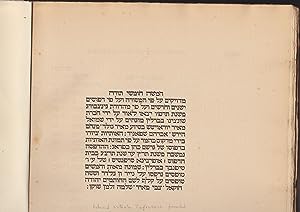 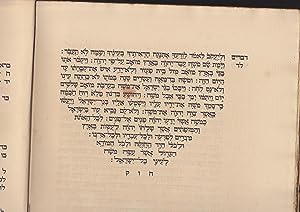 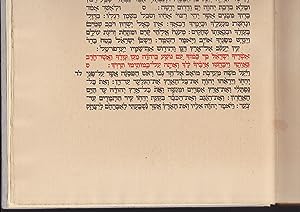 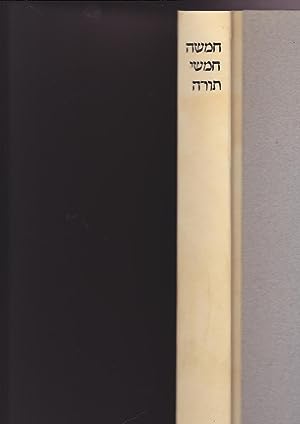 Edited by Jurovics, Shmuel Meir; with the aid of Gold, Meir; Hirsch, Menachem;

First half title yellowed. Edges untrimmed. New boards. vellum spine. Printed on special hand-laid Van Gelder paper, an expensive, high quality, hand-made, thick and heavy etching stock paper that was made in Holland a century ago and that has an ivory tonality with a soft, textured surface. Published in 850 copies, plus 6 copies printed on vellum. The font and ornaments were designed by the German calligrapher, illustrator, graphic artist, painter and leading type designer, Marcus Behmer. The font is styled after that of the 1526 Prague Haggadah of Gershom Kohen. Illust. half title. Decorative woodcut title in blue, golden brown and black in the style of a medieval manuscript. Initial word of each of the Five Books surrounded by arabesques and printed in blue, golden brown and black ink, with a decorative medieval manuscript motif. A few verses and single words printed in red. Half titles for the 1st 4 books are printed on a separate page (followed by their illuminated first-word text pages), printed in black. Deuteronomy's illuminated-first-word text page is printed on the verso of the half title. Printed by the Officina Serpentis, one of the finest German Private Presses, at the commission of the Soncino Geselleschaft der Freunde des jüdischen Buchers, a society of Jewish bibliophiles in Germany. The work was produced in 2 parts beginning in 1930, and was bound together as a whole at its completion. The opening page of Genesis, with its use of large grilled letters for the opening word of the text ("Bereisheet"), echoes the style of early Hebrew printing. The plan was to publish the entire Hebrew Bible, but the Gesselschaft was dissolved by the Nazis in 1937 and only the Pentateuch was published. "Ranks among the most beautiful Hebrew books ever printed" (A. J. Karp). See A. J. Karp, Library of Congress Catalogue pp 31-34 (illus); L. Avrin, The Art of the Hebrew Book in the 20th Century, in New York Public Library Catalogue, A Sign and a Witness (1988) p. 135 (illus,). One volume with the complete Hebrew Torah text. The opening and final verses of Moses' blessing to the Jewish people (at the end of Deuteronomy) were distinctively printed in red as a signal message of hope to the Jewish people. Founded in 1924, the Soncino Gesellschaft was a Jewish bibliophilic society which produced a wide variety of texts celebrating Jewish authors and promoting the Hebrew typographical arts. This book is considered the Gesellschaft's masterwork. This typographical masterpiece is deemed by many as one of the most beautiful Hebrew books ever printed and the most beautiful Hebrew Bible printed in the 20th century. Title page printed in blue, golden brown and black in the style of a medieval manuscript. The first word of each of the Five Books is also printed in golden brown ink with a lovely decorative medieval manuscript motif. The four half titles for the books of Exodus, Leviticus, Numbers and Deuteronomy, are printed on a separate leaf (followed by their illuminated first-word text pages), printed in black. The exception to this format is the Book of Deuteronomy, whose illuminated-first-word text page is printed on the verso of the half title. This edition of the Bible is noteworthy as the last Hebrew Bible printed in Germany before the Holocaust. It was the culmination of a four year project from 1929 - 1933 coinciding with the rise of Nazism in Germany and Hitler's coming to power. It seems that an attempt was made to evoke the wrath of God upon the wicked by printing two prophetic verses, (Deut. 33:1 & 29) in red, an anomaly, "This is the blessing with which Moses the man of God blessed the children of Israel before his death." and "Happy are you, 0 Israel! Who is like you, a people saved by the Lord, who is the shield of your help and the sword of your triumph! Your enemies shall dwindle away before you and you shall tread upon their high places." Considered one of the "Jewish Treasures" of the Library of Congress. unpaginated. Seller Inventory # 006985