Items related to How the Other Half Thinks: Adventures in Mathematical...

Home Stein, Sherman How the Other Half Thinks: Adventures in Mathematical Reasoning
Stock Image 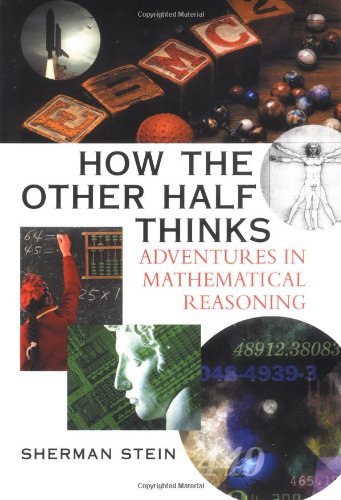 How the Other Half Thinks: Adventures in Mathematical Reasoning

Title: How the Other Half Thinks: Adventures in ...

Math enthusiasts aren't necessarily the number-crunching geeks we tend to assume. In fact, they know that math is about much more than numbers; it is a profoundly philosophical endeavor, as well as a stimulating mental exercise. In How the Other Half Thinks, Sherman Stein emphasizes the creative element of mathematics by exploring some significant mathematical discoveries through simple, intuitive manipulations. With an ingenious technie that uses no algebra or trigonometry, and only a minimum of arithmetic, Stein takes us through the thought process behind some of math's great discoveries and applications. Each chapter begins with a simple question about strings made up of the letters a and b, which leads to other, more profound questions. Along the way, we become familiar with concepts from such fields as topology and probability, and learn how they have led to applications such as codes and radar, computing, and even baseball statistics. Recreational and instructive, How the Other Half Thinks will appeal to die-hard math enthusiasts (of which there are many) as well as those "right-brainers" who are looking for a way to understand and enjoy math.

Each chapter starts with a question about strings made up of nothing more than two letters. This question in turn suggests thought-provoking problems. After these problems are explored and solved, the author shows how the related mathematics has been applied in areas as varied as computers, cell phones, measurement of astronomical distances, and cell growth.

An experienced educator, prize-winning expositor, and researcher, Stein engagingly presents each concept. The leisurely pace allows a reader to move slowly through each chapter, omitting no steps. This approach makes complex concepts like topology, set theory, and probability accessible and exciting. The book creates a bridge across the gulf between the two cultures: humanities and the sciences.

Stein shows how the mathematical style of thinking is one that everyone can use to understand the world. This charming book speaks to both those who employ the intuitive, creative right half of the brain, and to those who rely more on the analytical, numerical left half. How the Other Half Thinks is for the novice and the skilled, the poet and the scientist, the left-brained and the right-brained. When you read this book, you are immersed in the world of mathematics, not as a spectator, but as an involved participant.

"Occasionally, in some difficult musical compositions there are beautiful, but easy parts­­"so simple a beginner could play them. So it is with mathematics as well. There are some discoveries in advanced mathematics that do not depend on specialized knowledge, not even on algebra, geometry, or trigonometry. Instead they may involve, at most, a little arithmetic, such as 'the sum of two odd numbers is even,' and common sense. As I wrote, I kept in mind two types of readers: those who enjoyed mathematics until they were turned off by an unpleasant episode, usually around fifth grade; and mathematics aficionados, who will find much that is new throughout the book."
­­"Sherman Stein