Items related to Climb Back From Cancer: A Survivor And Caregiver's... 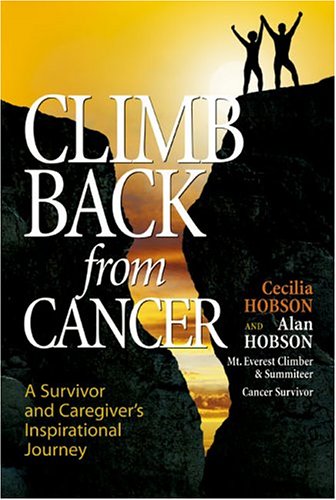 Climb Back From Cancer: A Survivor And Caregiver's Inspirational Journey

Quantity: 1
View all  copies of this book
Buy New
Price: US$ 40.00 Convert Currency
Shipping: US$ 4.00 Within U.S.A. Destination, rates & speeds
Add to basket

Title: Climb Back From Cancer: A Survivor And ...

The first book in the proposed "Climb Back from Cancer Collection"...Climb Back from Cancer - A Survivor and Caregiver's Inspirational Journey is both a gripping true adventure story and a touching love story. At the age of 42, international bestselling author, Mt. Everest climber and summiteer, Alan Hobson, believed scaling the world's tallest peak would be the biggest challenge he would face in his life. Over a decade, he had endured three grueling expeditions to Everest before finally standing on top on his third attempt. Then he had turned his ambition to becoming the best adventure speaker in the world. But three years after Everest, he came face to face with an even bigger mountain: he was diagnosed with acute leukemia, a cancer of the blood, and given less than a year to live. With the help of his fiancée, Cecilia, he not only survived, but thrived, and the couple emerged all the stronger from their shared trial. Climb Back from Cancer is their inspiring account of commitment, teamwork and triumph. The story offers not only a living example of how to climb back from cancer, but demonstrates how to transform adversity into opportunity. It includes "The 10 Tools of Triumph" for survivors and caregivers -- what the couple considers to be the key psychological skills required not only to survive life-threatening illness, but to thrive beyond it. Powerful, relevant and moving. A "must-read" for every patient, survivor and caregiver.

Cecilia and Alan Hobson are a vivid study in contrasts. She is a charming southerner, originally from Louisiana, who spent most of her life below sea level in the heat and humidity of New Orleans before moving to Boston to work as a senior marketing executive. He is a charismatic Canadian adventurer, winner of the William Randolph Hearst Award for Excellence in News Writing, international bestselling author of half a dozen books and renowned professional speaker who has been on three expeditions to the bitter cold and rarefied air of Mount Everest. At the time of Alan's diagnosis with cancer of the blood and prognosis of less than a year to live, they were only recently engaged. Yet Cecilia stood steadfastly by Alan through his treatment, recovery and triumphant return as one of fewer than a dozen people to attain an elite level of fitness after a blood transplant for acute leukemia. He has now been cancer-free for more than four years.

"I would never have survived treatment without Cecilia," Alan says. "She has taught me a great deal about love and commitment."

"Alan has shown me the incredible power of the human will," Cecilia says. "He is living proof of his belief that on the other side of fear is freedom."

After emerging victoriously from their cancer climb, the couple married and settled in the majestic Canadian Rockies, where they now live with their yellow Labrador, Shanti, the Hindi word for peace.