Items related to THE WANDERER 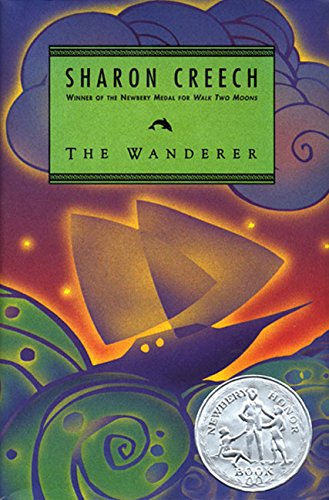 This is a First Editon hardcover book in a dust jacket in near fine condition for the book and fine condtion for the jacket. There is a very, very faint touch of fading at the tip of the top of the spine. This book is very crisp and new looking. There are some line drawings in black and white by David Diaz. The author won the Newberry Medal for a Walk Two Moons. ; 8vo; 305 pages. Seller Inventory # 6891

“A beautifully written and imaginatively constructed novel that speaks to the power of survival and the delicacy of grief.” —School Library Journal (starred review)

This acclaimed bestselling Newbery Honor Book from multi-award-winning author Sharon Creech is a classic and moving story of adventure, self-discovery, and one girl's independence.

Thirteen-year-old Sophie hears the sea calling, promising adventure and a chance for discovery as she sets sail for England with her three uncles and two cousins. Sophie’s cousin Cody isn’t so sure he has the strength to prove himself to the crew and to his father.

Through Sophie’s and Cody’s travel logs, we hear stories of the past and the daily challenges of surviving at sea as The Wanderer sails toward its destination—and its passengers search for their places in the world.

“Sophie is a quietly luminous heroine, and readers will rejoice in her voyage.” —BCCB (starred review)

"I am not always such a dreamy girl, listening to the sea calling me. My father calls me Three-sided Sophie: one side is dreamy and romantic; one is logical and down-to-earth; and the third side is hardheaded and impulsive."

Thirteen-year-old Sophie, skipping between "dreamland or earthland or muleland," hears the sea calling her. Much to the concern of her adopted parents, she decides to join her uncles and male cousins on a sailing voyage from Connecticut across the Atlantic to England (and her grandfather Bompie) on a 45-foot sailboat. Not only does she want to make the trip, she feels she has to.

This perilous cross-Atlantic journey will make young readers feel the wind in their hair and the salt spray on their face. Newbery Medal winner Sharon Creech (Walk Two Moons) describes the sailing experience with astonishing precision--from the smell of the sea to the intricate workings of The Wanderer itself.

Along the way, Sophie proves her bravery and competence to the rather grumpy all-male crew; intrigues and captivates her cousin Cody with her beautiful, odd stories of Bompie that always somehow end in underwater disaster and apple pie; and spills her heart into a daily journal. Readers get another angle on her, too, as Cody keeps a log that alternates with hers. He grows to know, and like, and wonder about, his new cousin Sophie along with the reader, and as her mysterious past reveals itself bit by bit, we are all right there on the edge of our seats, ready for the boom to crash over to the other side.

Sophie's adventures take her not only straight into perilous waves higher than buildings, but deep into her hidden past. This profound, suspenseful novel will pull you into its swift current and barely let you surface for breath. (Ages 9 to 13) --Karin Snelson