Items related to MUSICIANS OF THE SUN 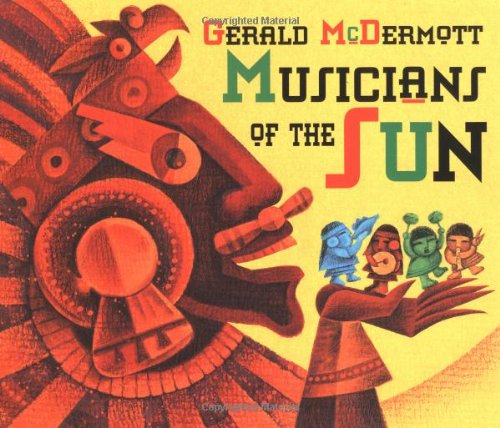 MUSICIANS OF THE SUN

This is a First Edition hardcover book in a dust jacket. The book has a tight binding and is crisp and clean. There are, however, two little spots like rain drops on the reverse of the end paper. There are no marks or writings. Bright, new looking. The dust jacket is equally crisp and clean. The price is present. There is no wear to describe. This is Aztec myth about the night sky, the sun , and music art and color. ; 8vo. Seller Inventory # 6864

Title: MUSICIANS OF THE SUN

When the Lord of the Night sees that his world is sad and colorless because his four special musicians have been locked-away by Sun, he sends Wind to free them to play their special music and fill the world with happiness once more.

Kindergarten-Grade 4. A retelling of an Aztec myth fragment in which the deity Tezcatlipoca, Lord of the Night, sends Wind to bring the musicians of the Sun to Earth, thus making all things joyful and colorful. McDermott has made several additions such as the weapons of thunder and lightning with which Wind bests the Sun, and he changes the clothing of one of the musicians to blue; the rainbow thus created brings color, as well as music, to the gray world. The language is spare and formal, almost like an invocation, full of dignity and drama. The illustrations, in McDermott's signature cinematic style, are wonderful, with the texture of the handmade paper evoking pre-Columbian codices, and the portrayal of the deities showing a knowledge of Aztec art. The colors, created with fabric paint, opaque inks, and oil pastels, are brilliant and intense. A note gives the history of the myth. The story, "How Music Was Made," appears in Irene Nicholson's adult book Mexican and Central American Mythology (Original Artworks, 1967; o.p.), which may be in some YA collections; a truncated version of it appears in John Bierhorst's The Hungry Woman (Morrow, 1993). Picture-book versions of Aztec myths suitable for sharing with classes are scarce, however, and this one should be welcome, especially since it is dignified enough to use with older children.?Pam Gosner, formerly at Maplewood Memorial Library, NJ
Copyright 1997 Reed Business Information, Inc.