Items related to Burning Fence: A Western Memoir of Fatherhood 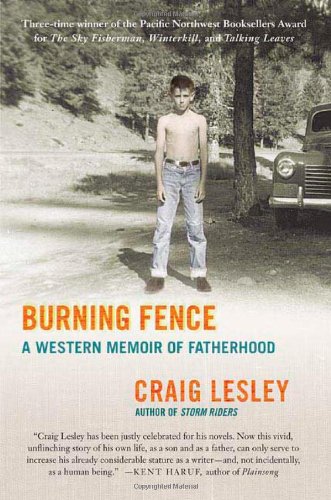 In Burning Fence, acclaimed novelist Craig Lesley turns his keen eye toward two difficult fathers and an alcohol-damaged Indian foster child, Craig's own "son," Wade. Abandoned by his shell-shocked father, Rudell, Craig grew up with his stepfather, Vern, a tough, controlling railroader. When events turned nasty, Craig, his mother, and his baby sister fled on the night train and arrived at an Indian reservation where his mother found work. Decades later, convinced he would be a better father than Rudell or Vern, Craig takes in the troubled Wade.

Skillfully capturing the rural humor, rugged characters, and hardscrabble life of Eastern Oregon, Burning Fence presents a searing reflection on fatherhood and offers remarkable insight into the landscape of the Western heart.

CRAIG LESLEY received the Pacific Northwest Booksellers Award for The Sky Fisherman, Winterkill, and Talking Leaves. He teaches at Portland State University in Portland, Oregon, where he lives with his wife and two daughters.