Items related to My Heart Is Africa: A Flying Adventure 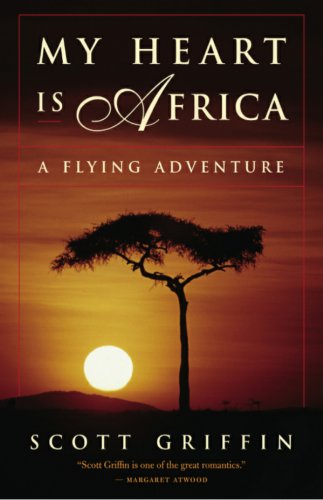 My Heart Is Africa: A Flying Adventure

Quantity: 1
View all  copies of this book
Buy Used
Price: US$ 15.95 Convert Currency
Shipping: US$ 6.00 From Canada to U.S.A. Destination, rates & speeds
Add to basket

Title: My Heart Is Africa: A Flying Adventure

In 1996, successful businessman and certified pilot, Scott Griffin, decided to break from the comfortable routine of his life to go work for the Flying Doctors Service, an African organization that flies doctors to remote areas to administer medical assistance. Griffin also made the daring decision to fly his small, single-engine Cessna 180 solo from Canada to Africa and back again. "My Heart is Africa" is the engaging, personal story of Griffin's two-year aviation adventure throughout Africa. Facing storms, equipment problems, fuel shortages and isolation, Griffin successfully made his way to Kenya - little did he know, his harrowing flight over the Atlantic was only the beginning of his adventure. Once in Africa, Griffin circumnavigated the continent, flying over deserts, mountains and jungles both as a medical volunteer and tourist. Throughout his journey - which included being arrested and crashing, then re-crashing, his plane - Griffin discovered the heartrending humanity and beauty of Africa. "My Heart is Africa" is an absorbing adventure story, but it is also the story of Africa - its problems and people, its landscapes and limitations, its culture and courage. Griffin's intrepid flying odyssey not only takes the reader on a journey across Africa but into the lives of all the doctors, nurses, aid workers and eccentric characters that crossed his path along the way. "My Heart is Africa" is a fascinating and gripping account of one man's quest to push beyond his personal limits in order to explore and experience a new way of life.

Scott Griffin is the Chairman and major stakeholder of two manufacturing companies and the owner of The House of Anasi Press Inc. He is Chairman and Trustee of the Griffin Trust for Excellence in Poetry and Chancellor of Bishops University. He is on several NGO boards, including the AMREF International Board based in Nairobi, Kenya. He is married to Krystyne Griffin and has four children and seven grandchildren. All royalties from the sale of this book will be donated to the AMREF Flying Doctors Service.