Items related to Orange County Choppers: The Tale of the Teutuls 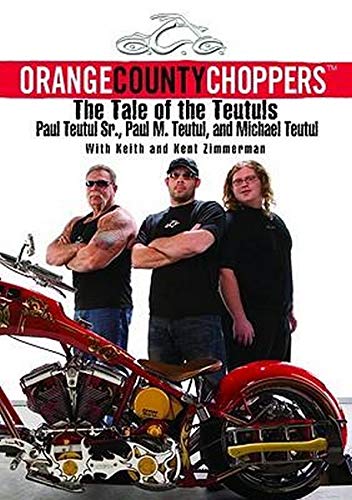 Orange County Choppers: The Tale of the Teutuls

Title: Orange County Choppers: The Tale of the ...

In the year 2003, Lady Luck reached out to a hard-living, hard-working family in a small town in Orange County, New York. That was when a team from the Discovery Channel began filming the custom chopper shop of Paul "Senior" Teutul, his son Paulie, and the rest of their highly dysfunctional, totally authentic crew as they did what they do best: make great custom-crafted bikes from the ground up. Within a few episodes, the Teutuls were famous: for their hilarious head-butting, their outrageous yelling, their amazing designs, and, most of all, for being real every step of the way. With their hit show American Chopper turning into the Discovery Channel's top-rated program, the Teutuls became unlikely national icons.
Now the Teutuls tell their story as it has never been told before. Senior chronicles his harrowing journey from a hell-raising teen to a star-crossed businessman desperately trying to keep his demons at bay. And Paulie remembers working by his father's side in their ironworks shop-and the bond that developed between them when they first built an EVO-powered custom chopper from scratch.
From youngest son Mikey's entrance into the shop to all the other members of the extended OCC family, this is a chronicle of Panheads and Softails turned into gleaming works of art, of Old School design versus Paulie's amazing theme bikes that took custom biking by storm-and earned the Teutuls some of the most famous clients in the world.
With over 60 family archive photos that capture this true rags-to-riches saga, ORANGE COUNTY CHOPPERS is the raw, honest story of a family that was born to be wild, how they came together around a shared passion and skill-and how they captured the heart of America.

Paul Teutul Sr., Paul M. Teutul, and Michael Teutul all live in and around Montgomery, New York, where they operate their famed Orange County Choppers shop.