Items related to Reconciliation: Islam, Democracy, and the West 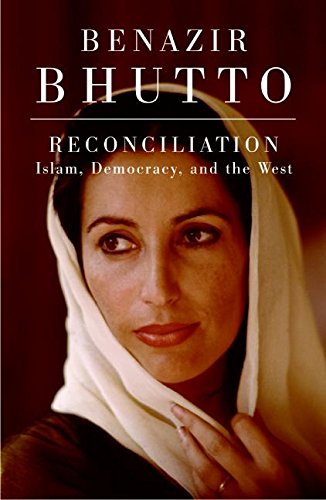 Reconciliation: Islam, Democracy, and the West

Quantity: 1
View all  copies of this book
Buy New
Price: US$ 20.00 Convert Currency
Shipping: US$ 4.00 Within U.S.A. Destination, rates & speeds
Add to basket

Title: Reconciliation: Islam, Democracy, and the ...

Benazir Bhutto returned to Pakistan in October 2007, after eight years of exile, hopeful that she could be a catalyst for change. Upon a tumultuous reception, she survived a suicide-bomb attack that killed nearly two hundred of her countrymen. But she continued to forge ahead, with more courage and conviction than ever, since she knew that time was running out—for the future of her nation, and for her life.

In Reconciliation, Bhutto recounts in gripping detail her final months in Pakistan and offers a bold new agenda for how to stem the tide of Islamic radicalism and to rediscover the values of tolerance and justice that lie at the heart of her religion. With extremist Islam on the rise throughout the world, the peaceful, pluralistic message of Islam has been exploited and manipulated by fanatics. Bhutto persuasively argues that America and Britain are fueling this turn toward radicalization by supporting groups that serve only short-term interests. She believed that by enabling dictators, the West was actually contributing to the frustration and extremism that lead to terrorism. With her experience governing Pakistan and living and studying in the West, Benazir Bhutto was versed in the complexities of the conflict from both sides. She was a renaissance woman who offered a way out.

In this riveting and deeply insightful book, Bhutto explores the complicated history between the Middle East and the West. She traces the roots of international terrorism across the world, including American support for Pakistani general Zia-ul-Haq, who destroyed political parties, eliminated an independent judiciary, marginalized NGOs, suspended the protection of human rights, and aligned Pakistani intelligence agencies with the most radical elements of the Afghan mujahideen. She speaks out not just to the West, but to the Muslims across the globe who are at a crossroads between the past and the future, between education and ignorance, between peace and terrorism, and between dictatorship and democracy. Democracy and Islam are not incompatible, and the clash between Islam and the West is not inevitable. Bhutto presents an image of modern Islam that defies the negative caricatures often seen in the West. After reading this book, it will become even clearer what the world has lost by her assassination.

Benazir Bhutto was the prime minister of Pakistan from 1988 to 1990 and from 1993 to 1996, and the chairperson of the Pakistan Peoples Party. Born in 1953 in Karachi, Bhutto was the first woman ever to lead a Muslim state. She lived in exile from 1999 until her return to Pakistan in October 2007, two months before her assassination.