Items related to Journey to Justice 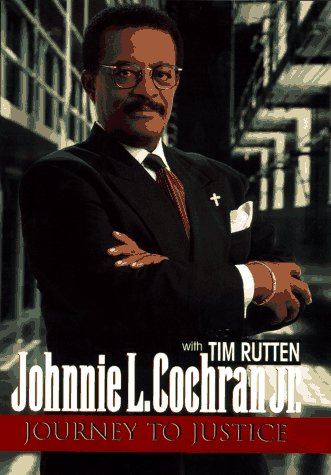 He's become a household name: Johnnie L. Cochran, Jr., the brilliant orator and legal strategist who captained the Dream Team in the trial of the century. But behind the man the media created is a story of a life spent in the trenches of the American legal system, fighting not for clients as high-profile as O. J. Simpson, but for individuals whose voices are too often silenced. Journey to Justice  is an unflinching portrait of Johnnie Cochran and the legal system that he has so profoundly influenced. It will forever change our understanding of what works and what doesn't in America's most noble and troubling institution.
From the Paperback edition.

No one came out of the O.J. Simpson murder trial mess with colors flying higher than the lead defense attorney, Johnnie Cochran, and no book from the key figures in the trial could be expected to shed more light on the successful defense strategy than Cochran's. Cochran, however, has chosen to write a pious, slippery memoir whose passages on his boyhood in Shreveport, Louisiana, are much more compelling than those on the trial itself. Cochran's charisma and his preacher's voice are on display here, as is his bitterness toward Christopher Darden, Robert Shapiro, his ex-wife, and just about anyone else who crossed or disbelieved him during his most famous case.