Items related to Actors, Audiences, and Historic Theaters of Kentucky 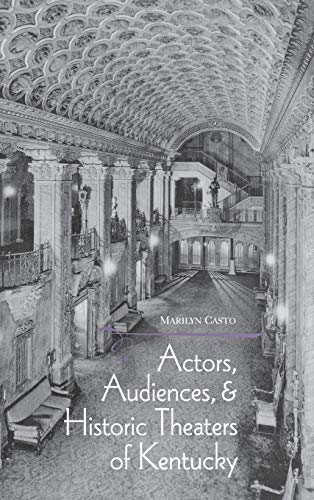 Kentucky emerged as a prime site for theatrical activity in the early nineteenth century. Most towns, even quite small ones, constructed increasingly elaborate opera houses, which stood as objects of local pride and symbols of culture. These theaters often hosted amateur performances, providing a forum for talent and a focus for community social life. As theatrical attendance rose, performance halls began offering everything from drama to equestrian shows to burlesque.

Today many architects believe that the design of a theater should not detract from the stage or screen. Marilyn Casto shows that nineteenth-century Kentucky audiences, however, not only expected elaborate decor but considered it a delightful part of the theatergoing experience. Embellished arches and painted and gilded walls and ceilings enhanced the theatricality of the performance while adding to the excitement of an evening out.

In Actors, Audiences, and Historic Theaters of Kentucky, Casto investigates the social and architectural history of Kentucky theaters, paying special attention to the actors who performed in them and the audiences who saw it all. A captivating glimpse into a disappearing slice of American popular culture, her work examines what people considered entertaining, what they hoped to gain from theatergoing, and how they chose and experienced the theaters' architectural settings. In the social and physical design of these theaters, Casto explores nearly two centuries of the state's and nation's cultural history.

“Will appeal to anyone interested in culture as well as lovers of theater and architecture. Well researched, it is full of interesting facts and photographs that will have you look at old theater buildings with new appreciation.”—Kentucky Monthly

“A detailed study of theater buildings and theater life. . . . Views theater as a place where art, literature, architecture, technology, and values intersect.”—Journal for the Society of Architectural Historians